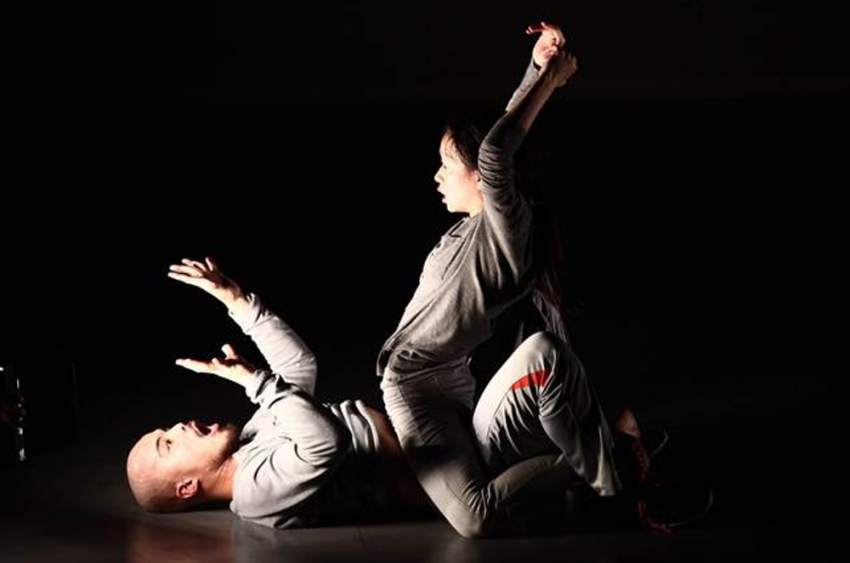 Dancer/composer/beatboxer/trilingual monologuist Liu Kuan-hsiang could not let his late mother Go Gentle into that Good Night. Instead, he downloaded her reminiscences, ruminations and deathbed dreams throughout her long siege of terminal cancer. He then cobbled the resulting harvest into a multimedia eulogy that is, by turns, poignant, raw or zany.

It’s a far cry from the funereal conventions of Confucian Filial Piety, with their decorously formalised shows of grief and geomantically optimized monuments. But, then, Madame Liu – acerbic raconteur, surreal fantasist, granddaughter of a blind fortune-teller and daughter of a jazz musician – was hardly a conventional Confucian matron.

So her equally outré son, a polymath enfant terrible of Taiwan’s frothy art scene, commemorates her with a hyperkinetic monument that, for all its irreverence, projects Filial Piety with a far wider feng shui reach. In the three years since his mother’s death, Liu’s hour-long dance-drama Kids (Chinese title: 我知道的太多了) has played from Taiwan to Beijing, Denmark, Japan, Germany, Hong Kong, New York and Singapore and now highlighting the PuSh Fest roster at Vancouver’s Scotiabank Dance Centre.

The recorded deathbed interviews are just the starting point. In Taiwanese or Mandarin, the old lady recaps details from her own childhood, the strenuous birth of her son and her enigmatic dreams. She coolly descants on the pains and prospects of her long decline and her immanent demise.

Some – not all – of this dialogue is surtitled, but the verbatim content hardly matters anyway once Liu starts mining it as pure sound. He dices the speech into phonemic snippets, loops and elongates the wave forms, tosses in some resonance, amps it all up, dials the pitches high or low, speeds or slows the tempo, splices in some drum tracks or electronica and embellishes it all with his own real-time squibs of mouth music or cryptic pronouncements in English.

The frenetic soundtrack is matched by the frenzied choreography. Liu is joined by a pair of female co-stars, Yu Wan-lun and Huang Yu-yuan. All three display stunning athleticism of their whirligig cartwheels, double-jointed contortions and compound human totem poles, yet they each can also achieve moments of great restraint, finesse and poise.

They rotate roles among themselves as mother, son, dream incubus or out-of-body observer. The deathbed transforms into a lying-in chamber, death throes become birth pangs which then morph into connubial spasms. Liu sometimes mouths both voices in a dialogue, lip-synching his mother’s falsetto simper as well as his own gruff rejoinders. Dancers home in on each other bearing shuttered, point-focused, high-glare spotlights.

The action plays out against a loose-strung, stage-spanning curtain of translucent white elastane that allows lights operator Lai Ke-chu to foreground the figures with frontal spots or silhouette them or project them as shadows (sometimes warped with distorting mirrors) from behind the scrim.

At the climactic moment of death, Yu looms into the scrim from behind as Liu, in front of the curtain, tenderly parses the ghostly white imprint of her face on the fabric. And then we switch to a back-lit shadow of Yu adrift in the amniotic glow of a womblike circular spot. It’s as impeccable a choreographic embodiment of Ancestor Worship as I’ve ever seen, stunning the PuSh crowd to momentary silence before a standing ovation.