Heart and ginger, returning to the root 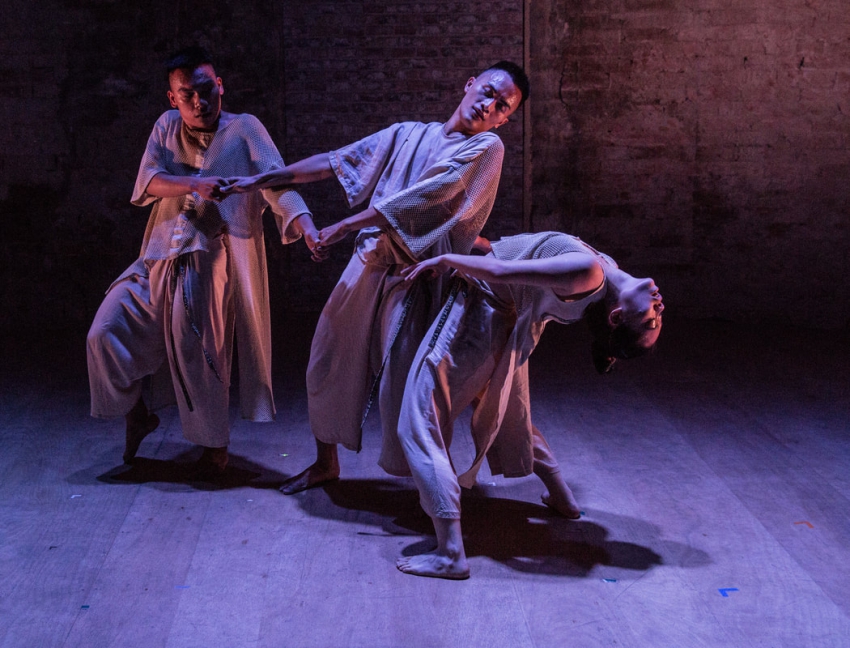 Stretching the daisy chain to its limits. Image: Tjimur

Ginger and song are the two indispensables that shape the life of a Paiwan tribal from Southern Taiwan. From birth a Paiwan baby is swaddled in a sling braided from fibres of the alpinia zerumbet, or shell ginger, and comforted with wordless cradle songs.

The vocalization becomes so internalized that, for a Paiwan, “every thought or feeling – even laughter or weeping – is expressed in song,” according to choreographer Baru Madiljin, co-founder with his sister, Ljuzem Madiljin, of the Tjimur Dance Theatre. The group makes its Vancouver debut with a new work, Varhung (“Heart to Heart”), March 29-30 at the Playhouse as the grand finale of this year’s Vancouver International Dance Festival (VIDF).

Just as pervasive as song is the savor of shell ginger (aka galangal in the produce bins of Asian specialty grocers, or月桃, “moon peach, in Chinese). The handsome rhizome grows wild in the Paiwan’s native Pingtung highlands. Its roots and leaves are staples of Paiwan cuisine and traditional medicine. Paiwan booleema (artisans) weave its fibrous leaf spines into cloth or twine them into cordage for hunting and portaging tools. Even in death, a Paiwan will be buried in a galangal shroud, to the sound of much singing.

Galangal – its intertwining growth, harvesting, preparation and cultural absorption – is a central theme of Varhung. It’s a metaphor for the deracination of the Paiwan; their stifled, layered and ingrown expression under waves of ethnic and economic encroachment. Over 500 years, they’ve been colonized, successively, by Ming irredentists, their Qing conquerors, Meiji Japan, Chiang Kai-shek’s whipped Kuomintang, U.S. cold warriors, corporate profiteers and, perhaps immanently, by Red China.

But the shell ginger is one tough plant that can quickly reassert itself once it regains a forest toehold – a fitting symbol for Paiwan hopes of a return to cultural roots.

You don’t have to be aboriginal to “get” Varhung. In fact, the Madiljins have been inducting assorted members of the Vancouver dance community as honorary Paiwan in a series of three VIDF workshops in the KW Productions Studio in the SFU Woodwards basement. But the one they were most looking forward to was Monday’s workshop for indigenous dancers, who know first-hand the thrill of reviving traditional arts and refitting them for future challenges.

So before any dancers took to the floor, Ljuzem polled Monday’s attendees on their own experience of indigeneity. Vancouver’s own Dancers of Damelahamid executive director Margaret Grenier, of mixed Gitksan and Cree ancestry, talked about the resuscitation of dance forms that had been legally banned for 70 years. Angelo Moroni, of Southern Chile’s Mapuche people, told of the near-extinction of tribal languages over generations of residential schooling. From Mexico, Salome Nieto related forced assimilation so extreme she no longer knows which tribe[s] she’s descended from.

The Tjimur dancers nodded in silent understanding, finding echoes in Paiwan’s own experience of aboriginal travails worldwide. At least now, with joint Canadian and Taiwanese government sponsorship (among others), indigenous peoples can dance together in solidarity. But first, it fell to Ljuzem to transmit the fundamental “grammar” of Paiwan dance.

It all starts with song. She had the whole workshop sing in unison a simple couplet spelled of welcome out on the studio’s projection screen. Then she matched it to the basic X-shaped four-step, forward and back, that underlies every Paiwan dance move.

Hold your heads straight, she admonished. In the village, traditional dancers would be wearing up to 20 kgs of hand-crafted regalia, maybe half of it in headgear. You could topple over if you veer out of plumb.

Now match your breathing to your singing and your step. Inhale, forward, exhale, back, fitting the song syllables accordingly. Array yourselves in a line, married men leading, followed by bachelors, maidens and matrons. Link hands with your neighbor in a crossed-arm daisy chain. Then dial down your singing to just an aspirated whisper until you’ve so internalized the song that it’s implicit in your breathing without any syllables voiced aloud. Embellish the four-step with assorted toe-kicks, heel-lifts, hops and pivots.

All this is trickier than it sounds or looks, despite the stolid 4/4 or 7/8 rhythms and the geometric regularity of the steps. It takes the workshop attendees the better part of 90 minutes to really get the hang of it, with the lesson interrupted by a comically precarious staging of a Paiwan wedding rite. It’s a mock kidnapping, with Moroni, as the groom, absconding with Grenier, as the bride, on his back.

But the Tjimur troupe saved the dramatic highlight of the workshop for the tail end of the two-hour session: an excerpted preview scene from Varhung. To a trobbing electronic pulse, the dancers accompany themselves with forceful gasping and panting as they mime the hacking, peeling, curing and weaving of galagal in its transmutations from forest plant to village staple.

Pretty much everything in the bravura performance was recognizably an elaboration of the basic "grammar" we'd just learned. But it all added up to a display of immense power and poignancy, worlds away from Western dance conventions.

“Cutting the ‘moon peach’ is like slicing open one’s own heart,” Baru explains. “stripping it is like sifting one’s innermost feelings. Weaving the strands is like holding close one’s secrets. And sharing it…well, that’s culture.”

By the end of the excerpt, the dancers have regained their singing voices, a soloist leading them in chant and choral response. They rejoin hands in an intricate, involute Cat’s Cradle line dance. The song ends with a mighty joint exhalation that leaves the workshop audience speechless.

But before we can all catch our breaths again, we’re bundled out of the KW Studio to make room for the next VIDF rehearsal. “That was just a foretaste,” Ljuzem wants us to know. “Come Friday or Saturday to see the real thing in full, with costumes, sets and lights.”

I wouldn’t dream of missing it. Neither should you.