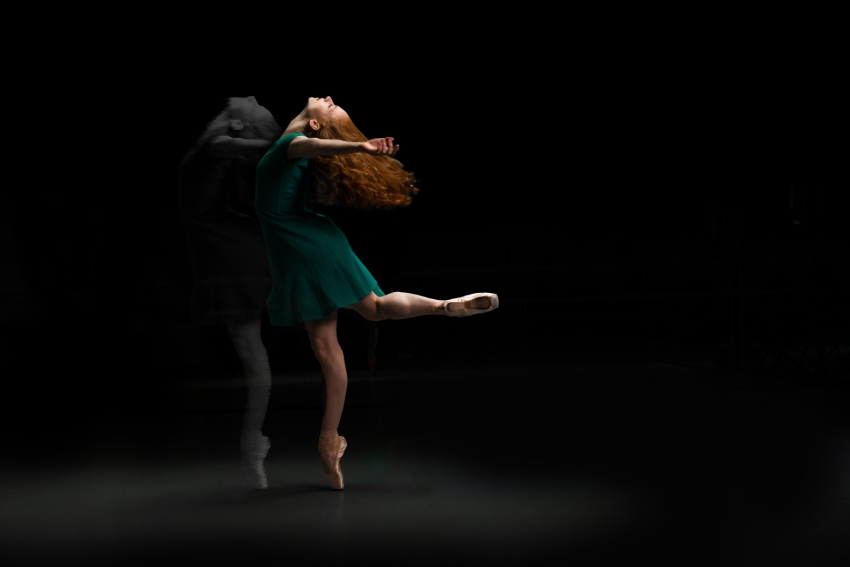 Barely a fortnight before the world premiere of choreographer Joshua Beamish’s radically innovative 21st century reimagining of the classic ballet Giselle, Catherine Hurlin, the 23-year-old prodigy in the title role, finally got to meet some of her co-stars.

They included a hologram, a ‘tornado’ and a cloud of glowing monads, not to mention half a dozen vengeful female ghosts. Must’ve been a pretty striking encounter, even for an artist as preternaturally poised as American Ballet Theatre soloist Hurlin.

“Definitely weird,” she reports. “A little disorienting, too” to be dancing amidst a swirl of larger-than-life giants. “But I’m getting used to it.”

High time. She’s been readying her title role in @giselle (as the Beamish work is called) for the past three years. She’s already well acquainted with most of the more corporeal supporting players, recruited from among the headliners of topmost Canadian and American ballet companies, with whom she’ll share the Vancouver Playhouse stage at the September 5th premiere.

But her other-worldly co-stars are mind-benders of a whole different order: digitized avatars of Hurlin herself, as recorded executing Beamish’s paces in a wired-up body suit in 2017. Animator Brianna Amore then realized the motion-captured data sets into an array of projected personnae that unfurl across onstage screens and scrims, interacting in real-time with @giselle’s flesh-and-blood cast.

Beamish, Amore, the 15 live dancers and assorted techies – altogether a 30-member crew – have been assembling the production since 2015. After making his fame at the pinnacles of the dance world in New York and London, the 32-year-old Kelowna-born choreographer has come home to roost – long-term, he hopes – back in B.C.

As far as he’s concerned, there’s no better place to develop and premiere innovative new works. “I’ve had seven weeks of residencies in Mission, Chilliwack and Kelowna," he boasts.. "By the time it goes on tour, every aspect of @giselle will have been optimized in real world theatres and live-audience-tested. Try getting that in New York or London."

But the process has been piecemeal; it wasn’t until just this week that all the elements came together in tech rehearsals which brought Hurlin and the other live dancers face-to-face with their virtual incarnations. The net effect, Beamish explains, should be a hi-tech hall of mirrors.

Consider, for example, his treatment of one of the most celebrated scenes in the canon of Romantic ballet – the initial encounter between Giselle, a village ingénue, and her love interest, a rakish duke passing himself off as a simple (but dashing and mysterious) young yeoman. This classic pas de deux gets multiplied, in @giselle, into a pas de six: the male and female dancers facing away from the audience to interact with each other’s blown-up, digitised, frontal images, as well as colophon “thumbnails” of themselves.

We become voyeurs to an online courtship, peering over the shoulders of a couple in a torrid Skype clinch. For Beamish, this cyberpunk restyling is no bug – no mere detail of décor – but rather the definitive feature of the production, finding whole new layers of meaning in the 180-year-old score and scenario of the classic Giselle ballet.

After all, he points out, the story’s all about feigned identities and the murky frontier between what’s virtual and what’s “real.” Seduced by the well-born imposter, Giselle discovers his ruse and dies of a (literally) broken heart, only to be recruited from the grave by a posse of “Willi’s,” the vengeful ghosts of young virgins who’ve been fatally spurned.

That adds up to a consummate Romantic ballet, a farrago of crowd-pleasing set pieces – the exuberance of a village fair, the pageantry of a courtly hunt, the Gothic gloom of a haunted forest – all daubed in the vivid hues of a storybook folk tale.