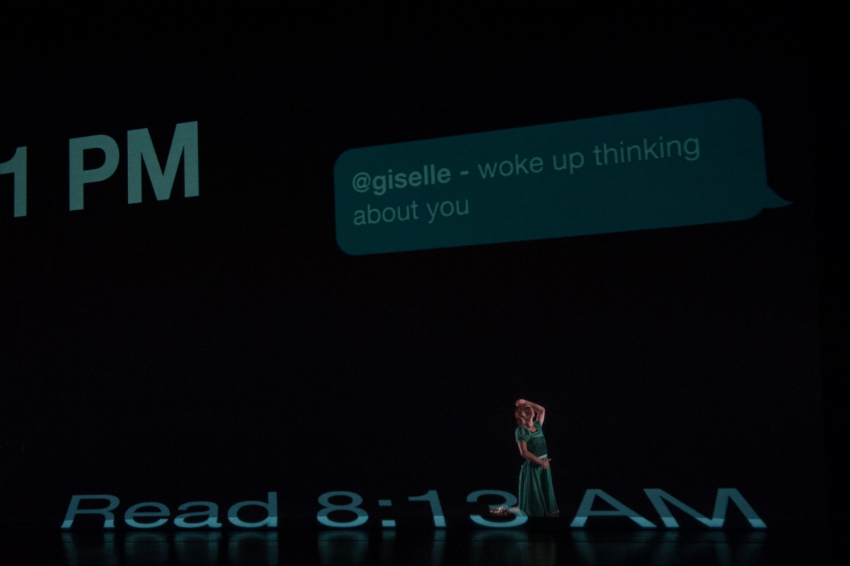 Catherine Hurlin, all alone by the telephone: dark night of the virtual soul. Photo: Cindi Wicklund

After four years a-borning, @giselle, a 21st century re-imagining of the classic 19th century ballet, has finally made its world premiere debut on the Vancouver Playhouse stage.

“O frabjous day! Callooh! Callay!” as the anonymous narrator of Lewis Carroll’s Jabberwocky was heard to have chortled when his heroic son came galumphing home with his manxome foe’s head in hand.

“Come to my arms, my Beamish boy!”

That’d be choreographer Joshua Beamish, in the present instance. Like Carroll in Jabberwocky, Beamish in @giselle has invented a new language, which makes the work hard to describe but perhaps destined for classic status in its own right.

Beamish, a prodigal and prodigious son of Kelowna, has come home to his native B.C., after storming the pinnacles of the U.S./U.K. dance world, to nurture cutting-edge new projects in modernesque genres. @giselle, though, is his deepest foray yet into the rigorous realms of canonical, en pointe ballet.

Such is his reputation and charisma that he’s been able to recruit some of North America’s topmost rising young ballet talents for the long-haul of @giselle’s gestation – American Ballet Theatre Soloist Catherine Hurlin in the title role of a lovestruck ingénue; National Ballet of Canada Principal Dancer Harrison James as @albrecht, the philandering toff who woos her in the guise of @loys, a flirtatious homeboy; and Principal Dancer Sterling Baca of the Pennsylvania Ballet as @hilarion, the jealous swain who “outs” the two-timing seducer.

In Act I of the original 1841 ballet, this love triangle plays out against the pastel, storybook backdrop of a quaint German village. But in Beamish’s retelling, it takes on the darker overtone of a pervasive (or invasive) all-purpose website,"The Village," that has (according to the program notes) “streamlined all basic needs – searching, dating, sharing and validation.”

Projection Designer Brianna Amore recreates the virtual world of this cyber-panopticon with an ingenious array of scrims and screens that allows us to view the characters’ blown-up video representations, their interlocutors’ “thumbnails” and their remote “followers” alongside their own IRL (“in real life”) personae. The vapid internet clichés of their online text-chats contrast pointedly with the intensity of their danced emotions.

And, through the magic of motion capture animation, we even get to see the characters’ own recorded paces transformed into surreal Special FX avatars. These ghostly emanations are all the spookier in Lighting Designer Mike Inwood’s muted, oblique chiaroscuro, with dancers sometimes swallowed up into their own shadows as projected from behind upon swirls of mist.

To highlight the mystery, Costume Designer Janie Taylor – herself a recently retired second-careerist after long innings as a principal dancer with the New York City Ballet – has outfitted the male leads in monochrome tunics. This allows them to perform some of their most heroic partnering lifts almost invisibly, so the vaulting ballerinas seem to waft eerily through miasmas of stage smoke, unsupported, in sheer ectoplasmic flight.

It’s in Act II that all this snazzy stagecraft really comes into play. That’s when, at the revelation of her lover’s treachery, @giselle has already died of shock in the arms of her grieving mother (Ballet BC’s own resident teacher, Beverly Bagg). Wracked with guilt, @hilarion and @albrecht are each haunted by the specters of young, spurned virgins – “Willi’s,” as they’re called in German folklore – who died broken-hearted. Led by a seductive harpy ghost (Edmonton Ballet’s Yoko Kanomata) the eight Willi’s form a vengeful posse that’s out to dance any passing male to death.

They succeed with @hilarion; Baca expires in gruesomely convincing final rictus. But the ghost of @giselle spares @albrecht from their clutches in a tender pas de deux. As the mists clear and the spotlights brighten, he celebrates his release with a dazzling (and ovation-worthy) series of multiple entrechats – only to be grounded again for a gentler, more humane reconciliation with @bathilde (American Ballet Theatre’s Betsy McBride), the upper crust earthly fiancée that he’d betrayed when he went “slumming” in The Village.

Unlike the unquiet Willi’s, @giselle’s ghost is finally laid to rest, persisting just as a dancing colophon video projected in miniature onto the heart of her statuesquely mournful mother.

This storyline, with its mash-up of rustic dalliance, amorous melodrama and gothic frisson, might have been tailor-made for the taste of the early romantic 19th century, but in our own jaded age it seems dated and a bit corny. So does the competent, if somewhat overblown, Adolphe Adam score.

But, by unfurling the action in a virtual, online world, Beamish and Amore recharge the old tale with new salience. The aesthetic is bound to resonate with Next-Gen balletomanes – the split-screen, multitasking, quick-flick pacing of Act I; the psychedelically infused “red pill” ambience of Act II’s “experiential lounge” setting.

But there’s more to the transposition than mere, gimmicky details of décor. Feigned identity, fatal infatuation and insurmountable caste barriers—the drivers of the original Giselle story – recur even more pointedly in cyberspace.

So, in a world where precedence is counted in “follower” eyeballs rather than feudal estates, @albrecht and @bathilde, for instance, reign online as a “Public Figure” and a “Social Encourager,” respectively, rather than a Duke and Duchess. @loys’ shy flirtation can coexist simultaneously with @albrechts’ strutting and preening.

Banal chat dialogue scrolls across the screen even as the dancers enact their deepest passions. “Followers” appear in projected thumbnails, reacting in real time to the protagonists’ vicissitudes. When @giselle finally opens up her “private” account to livestream her despair and death, she suddenly acquires thousands of horrified “followers,” who fill the downstage scrim in a matrix of thumbnails.

The 40-foot-high scrim allows for huge zoom-in projections, imposing a layer of detailed cinematic realism over the formal balletic choreography of the live dancers. This can be enormously effective, as in the opening scene where we see @giselle running through a repertoire of facial expressions, coiffures, color saturations and light levels to prepare for her online tryst with @loys. It can also prove distracting or disorienting, especially in the more text-heavy sequences of Act I.

Beamish and his team, though, will have plenty of chances to iron out any such kinks if @giselle attains its well-deserved longevity on the worldwide repertory stage.