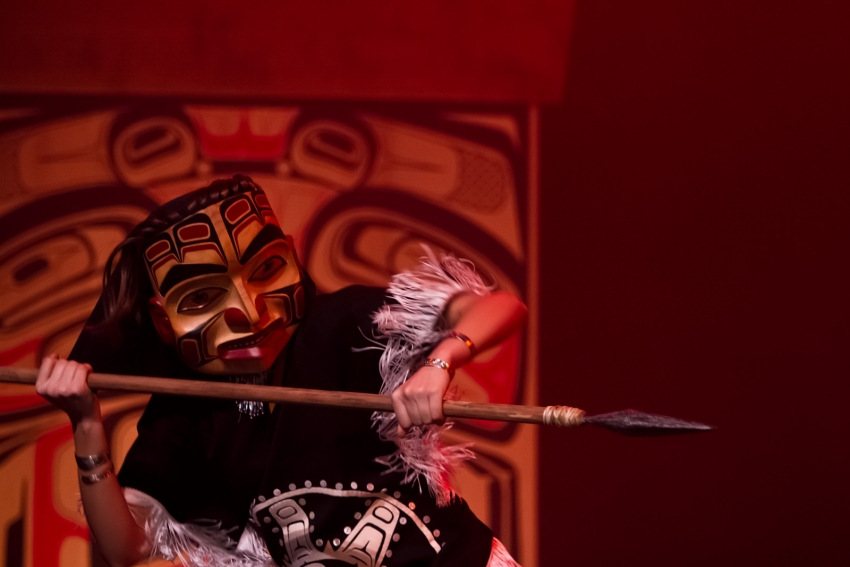 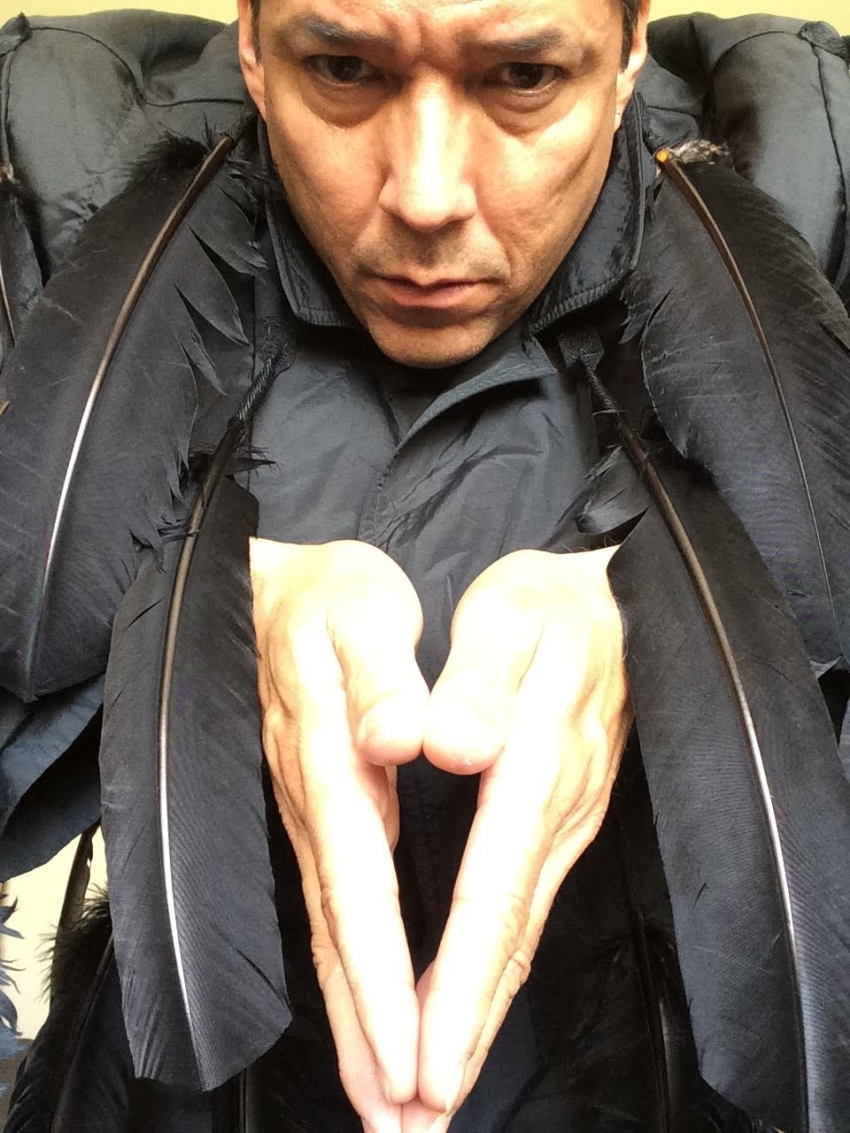 First Nations subjects loom large in the calendar of dance events for March and April. To get ready, we went out to UBC's Museum of Anthropology (MOA) one rainy afternoon for the opening event of the Coastal Dance Festival.

The majestic setting -- towering totems in the giant glass atrium of the Museum's Great Hall against a swirling coastal cloudscape -- couldn't have been more apt for the featured troupe, the Demalahamid Dancers of the Gitxan tribe, the "people of the river mists."

And the program fit the mood: plant and animal motifs in stunningly stylized masks and robes, circle dancing to the stately rhythms of chants and drums. The audience, mostly comprising busloads of school groups, was duly awed.

With that under out belts, we thought we were well prepped for another Indigenous-themed festival opener, REsolve by the Ottowa-based troupe Circadia Indigena.

Which left us a little taken aback when the scene at the Roundhouse opened on a blank, black set with a lone figure -- lead dancer Jerry Longboat of the Mohawk nation -- sprawled stage centre to a high-decibel, atonal background of grunts, growls and violin screeching.

No beaded regalia here -- just the rag doll ruin of a shredded thrift-shop suit. No carved masks, either -- just ghastly white pancake makeup with the features crudely outlined in black.

Two comperes -- Byron Chief-Moon and Nyla Carpentier -- join him onstage in similarly tatterdemalion get-up. If this is meant to reflect the Native American experience, it seems to be homing in on the Skid Row chapter of the long Trail of Tears.

Yet the basic modes of the dance are recognizably indigenous: the crouching gait, the interlocking circles, the slow, swooping flap of the eagle (or is it a raven or a vulture?)

The dancers are multiplied on stage by a blown-up, back-screen projection of their own real-time video images. The electronic roar amps up, segues into a thumping techno score and is presently overlain with a hollow, crackling megaphone voice intoning bland recipes for how to dupe the people (tribes?) into the dumbed-down homogenization of mass culture.

Then the cacophony abruptly stops and Longboat wheels directly upon the audience and paces the stage, haranguing us, in his own urgent voice, save ourselves by turning off our TV's -- "just a boredom killing business that'll feed you any lie you want to have."

As though to illustrate our peril, the dancers resume their frenzy, waltzing, fighting, then propping each other up, then collapsing into cordwood-like heaps only to rise again and twitch anew.

Then they all stop and take a bow, basking in our well-deserved plaudits for their energy, originality and technical mastery.

So our takeaway from these two performances: First Nations subjects are complex. To try to understand them through artistic productions, it helps to go in with a least a bit of background sense of what you're getting into.

Vancouver balletomanes looking forward to its presentation here next month might want to get a head start on background preparation with a free forum this Wednesday (March 9th) at the Vancouver Public Library's Main Branch.