As befits such a solo tour de force, all stagecraft elements centered on Vancouver’s homegrown dancer/choreographer star. Set designer Andreas Kahre laid out a stark white circle on the black stage, mirrored in the backdrop by a foreshortened white oval adrift in a sea of black. Lighting designer Mike Inwood echoed the bullseye theme with overhead spots as well as sidelight gels and an array of what looked like tripod-mounted klieg lights, all focused on Funk Barton.

We filed in to find her already seated in meditation downstage. As the houselights dimmed, she stood up and scanned the audience, row-by-row, lingering for eye contact. Then she practically dove into the white onstage circle, only to swim back to its edge and wriggle her way out to the black periphery like some pioneering Ichthyostega’s first terrestrial venture out of the primordial ooze.

Some staggers and stumbles as she struggled to gain her land legs. But before long she was vaulting and capering, running laps around the stage. And then downstage center again to mug straight into the audience in a rapid-fire series of grins and grimaces. Which soon devolved into a bout of laugh-until-you-cry hilarity much like Vision Impure’s, but all the more unnerving when executed solo, without an interlocutor.

VAST, according to Funk Barton’s choreographer notes in the Biennial program, ponders how “despite our [human] limitations, we still…propel ourselves…into unknown territory.” So she resonates accordingly from drollery to sublimity, idiosyncrasy to universalism, gaucherie to equipoise. Even composer Marc Stewart’s original score veers from abstract electronica to disco swing and back again.

In the end, Funk Barton waded back into the white circle, hesitantly at first but with growing confidence until she wound up languidly spinning, dead center, like a serene dervish in indrawn ecstasy. 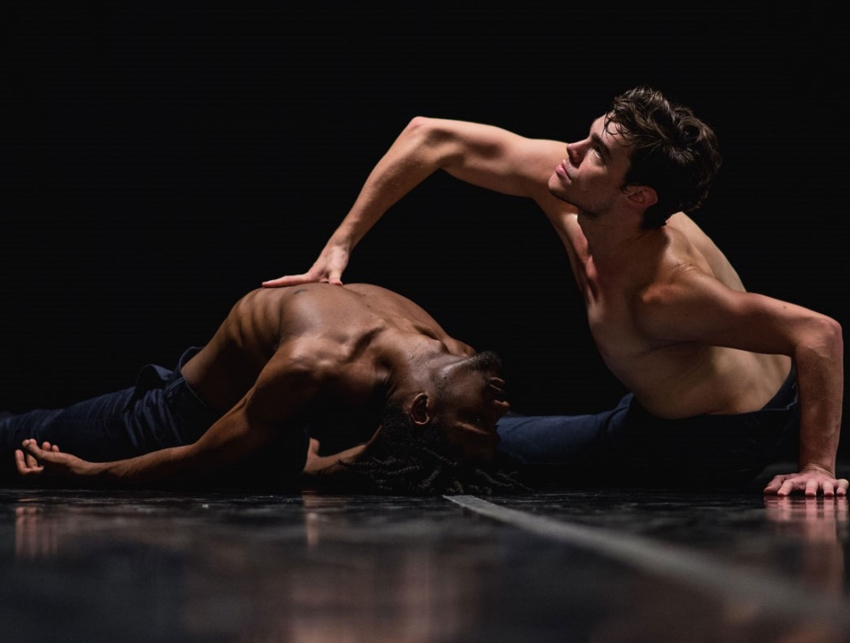 Getting on down in Saudade -- a vertical idea, horizontally expressed. Photo: Craig Foster

Ecstasy seemed hard come by for Joshua Beamish/MOVETHECOMPANY’s six male dancers, though not for want of trying. In plainclothes slacks and T-shirts and muted lighting (Mike Inwood, again, in a more subdued mood), the performers slid and sidled past one another, hookup-ready but wary. They flexed and arabesqued in kaleidoscopic formations and then broached one another “with many a flirt and flutter,” like Poe’s portentously preening Raven. Even the music takes on a somber hue in a cello-heavy score by Icelandic superstar Hildur Guðnadóttir.

Sometimes the dancers would “click” in intense – but evanescent – pas de deux. I couldn’t help thinking of my favorite game as a kid, which involved an assortment of bar magnets that would chase each other around the table, attracting or repelling, clumping together or flying apart with hypnotically mysterious force according to the shifting alignment of their poles.

Dance, according to George Bernard Shaw, is “the perpendicular expression of a horizontal idea,” but MOVETHECOMPANY, it seems, never quite got the memo. Lots of impressive floor work by the very accomplished sextet. And even when the dancers did go vertical, the grinding still went on. At one memorable moment, they stripped off their tees for a mesmeric display of topless flexion choreographed entirely for nothing but their shoulder blades.

Now and then Beamish himself circulated among the clinching couples, a stray satellite sketching eccentric epicycles in a tight-bound planetarium. These wraith-like perorations underscored the dominant mood of the work, as reflected in its title: Saudade. That, according to Beamish’s program note, is Portuguese for “the love that remains after someone is gone…to feel saudade is to feel a deep incompleteness and recognize it as familiar.”