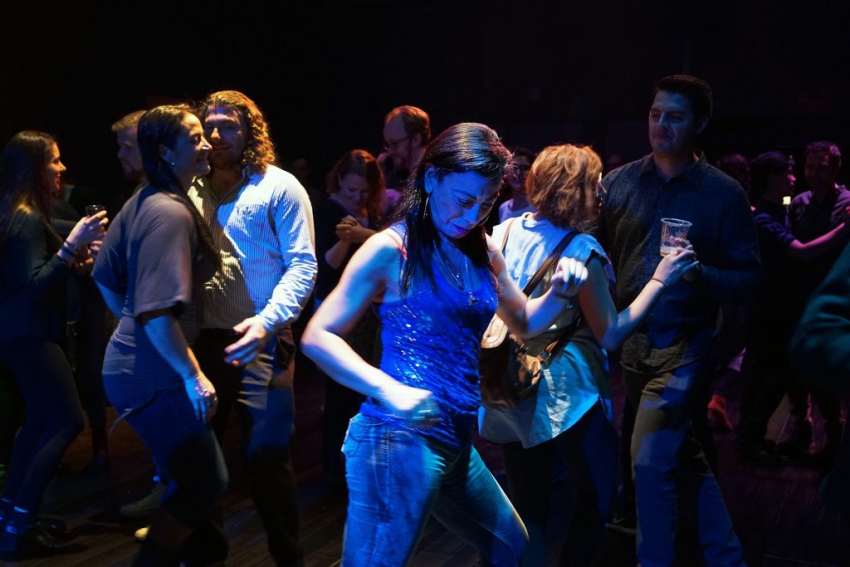 Am I bloooo? You'd be toooooo... Photo: Cultch

As even the most white bread norteños have come to realize, there’s way more to salsa than the jars of bland, green pickle relish offered under that name in the chain grocery’s “condiments” aisle.

Likewise with the dance floor variety of salsa.For the coming week, in her star-turn monologue Broken Tailbone, veteran literata, feminista and leftist Passionaria Carmen Aguirre dishes out her own patent mixture of Pico de Gallo.

It’s very hot and very Red. And she invites you to mix your own salsa along with her, right down on the stage floor, while she presides as a sort of dancing coach from a dais erected atop the plush, red-flock audience seating of The Cultch’s Traditional Theatre.

It’s a far cry from your usual Rec Centre salsa class. Aguirre sets herself up as an irresistible, incontrovertible Jefa (feminine for “Boss”) who reinforces her directives with a background discourse on the etiology and symbolism of every dance step.

So we learn that the lower body – swivelling, tamping, rocking, shuffling – is the rooted African half of the salsa dancer. It communes with Mother Earth, fertilizing, planting seeds. No broad steps allowed. Remember, these were slave dances; the feet were shackled.

Once she’s got us all heaving and throbbing and acquainted with the basics, she works in a few variations and refinements: the hacking “machete” sweep, the flailing NeuYoRican lope, the ass-backwards “booty” grind, the origins of the limbo as a funeral rite of passage, the twitchy pelvic stutter of El Torque.

Nor does Aguirre limit her disquisitions to the dance steps themselves. Each time her onstage DJ Pedro Chamale spins new platter, she launches into an autobiographically reminiscent monologue about the genesis of the song.

Revolutionary anthems, to begin with, dating from Aguirre’s initial arrival in Vancouver, age seven, as she fled with her parents from the U.S. CIA-orchestrated putsch against her native Chile. That was the first influx of Latinx refugees in Canada.

Successive waves brought in displaced persons (DP’s) from the likes of Nicaragua, El Salvador, Honduras and Mexico, each with their own distinctive music, dance steps and horror stories of counter-revolutionary political persecution. Aguirre reels off the whole sad catalogue, laced with the by-now-customary fist-shaking, middle-finger-waggling, potty mouth invective of this year’s “woke” polemical theatre.

But she anneals it all with her infectious smile, wry irony and non-stop jiggly jouncy dance moves, all the while cheering us on in our own salsa exertions. And, now and then, lighting designer Michelle Ramsay dims the spots, whereupon Aguirre breaks into extended riffs of Spanish – prayers, elegies, once even an almost lyric evocation of the Nicaraguan Contras’ contemptible parentage and karmic deserts; very effective contrast to the ongoing disco glare and the unremitting tattoo of blunt, Anglo invective.

About midway through the 70-minute group grope, Aguirre promises us “no more political songs. From here on, it’s all about fucking.” That’s pretty much all the LatinX disco population can agree on anymore, she explains, now that the population of Hispanic DP’s has become so multifarious.

Nevertheless, her sexy reminiscences and torrid dance moves retain lots of political overtones. Among her paramours: a 22-year-old guerrilla descended from a notorious Chilean torturer, and a statuesque Cuban Santeria mage who placates the spirits besetting Aguirre’s last stage-play.

And then there’s Serbian Vlad – should we nickname him Vlad the Impaler? It was he who broke the show’s eponymous tailbone for Aguirre. But never mind. He was so wonderfully – nay, “tenderly” macho. That, she explains, is “the kind of manhood that can match our strong womanhood.”

Even this observation can be read with a political subtext, for those who have followed Aguirre’s controversial embroilment in the recent legal and PR turmoil of the UBC Creative Writing Department.

“Women are not doormats,” she asserts in the sizzling finale of Broken Tailbone. “We know how to say ‘no.’ I’m gonna let it go at that.”

No mistaking this vibrant, charismatic Jefa for anybody’s idea of a doormat. But you could hardly ask for a more engaging ‘Welcome’ mat to the sheer exuberance, pathos and indomitable life force of Latinx culture, music, dance and struggle.