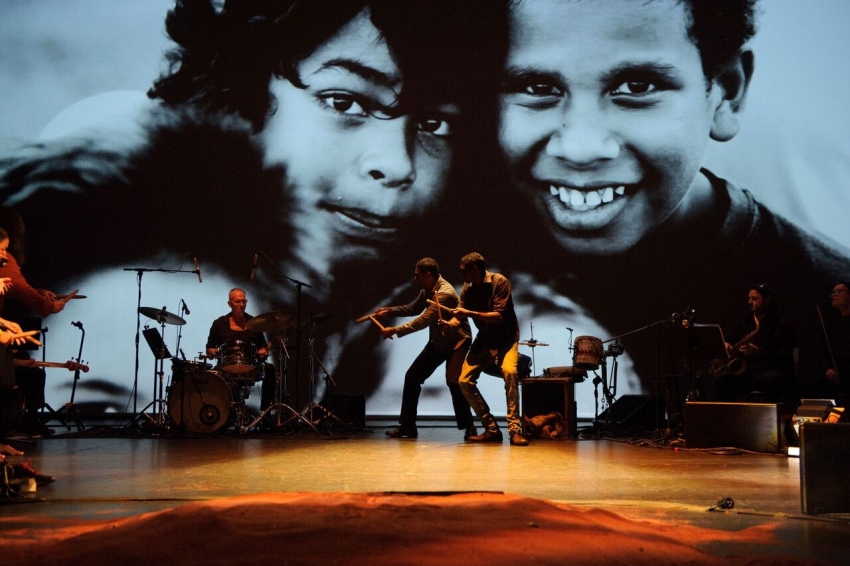 Some ticketing mix-up kept much of the packed-house PuSh crowd at the Queen Elizabeth Theatre queued up for half an hour in the snow for the Festival’s grand finale: the one night engagement Saturday of Dirt Song, a multi-media spectacle by Australia’s most celebrated indigenous ensemble, the Black Arm Band.

So we were well primed for a shift of climate from the Hamilton Street slush to the arid antipodal plains. As the houselights dim, the giant cyclorama behind the stage lights up with a tracery of lacy foliage (gum trees? eucalypti?) silhouetted against backlit morning mist.

And then we zoom in on the leaf-littered ground and a close-up of scuffing feet rhythmically kicking up the dust. Hard-worn feet, flat, splayed and gnarled, with toes that look almost prehensile.

Free feet that might never have been bound up in shoes – as bare as the feet of the onstage aboriginal singers, dancers and musicians who presently take up the onscreen pace and blend their melodic lines in complex harmonies.

And right away they’ve caught us, the whole 3,000-member QE crowd, with no more than a lilting tune, a few atmospheric images and an aura of ancient, sun-baked wisdom.

Just as well, too, for neither the Black Arm Band troupe nor the PuSh Fest provide much else – no programme notes, not even a cast list or a menu of songs – to get us through the next 80 minutes of music in some 11 different aboriginal languages from the other side of the world.

But the music speaks for itself – by turns haunting, lyric, headlong or ebullient. And the cyclorama images link it all together – black-and-white videos by Melbourne’s Daybreak Films.

That latter tableau serves as backdrop for a witty sequence in which Melbourne percussionist Rory McDougall concocts a makeshift trap drum kit out of scrapped auto parts. The resulting assemblage anchors the soundtrack for an ecstatic cakewalk.

McDougall, the drummer, along with bass guitarist Mick Meagher travelled with the troupe from Australia. But Black Arm Band’s most striking musical import was Aboriginal virtuoso Tjupurru on a 2+ metre long tubular contraption called a didjerbone. It combines the navel-tickling basso drone of Northern Australia’s traditional indigenous didgeridoo with the tonal modulation of a slide trombone.

But, for all its brio, there’s an underlying seriousness to Dirt Song. As Musqueam chief Wayne Sparrow recognized in his opening invocation, indigenous Australians are “cousins from afar” of Canada’s own First Nations. They share parallel traumas – marginalisation, expropriation, exploitation, cultural genocide – as well as a spiritual tenacity.

Black Arm Band’s very act of singing in so many aboriginal languages is testament to his peoples’ valiant resilience, as far as artistic director Leone is concerned.

The programme ends with the same sequence of video images as it began: a tracery of leaves, a big sky of brooding cloudscapes, soaring raptors and then a close-up of Australia’s dry, baked earth.

Except this time I notice in the zoom shot (which had escaped me before) a few indomitable voles peeping out of their hole-in-the-ground lairs. Predator and prey, flyer or burrower.

In absence of programme notes I’m left to wonder which one looms larger in the aboriginal dream-time cosmos. Raptor or rodent? Or both?