The Messenger is the latest novel from Vancouver-based actor Stephen Miller. The plot concerns Daria, a woman of unknown origin – mostly likely Arab – who is injected with a smallpox-like virus, one that will eventually kill her, and told to transmit it around the world, hence becoming a bio-terrorist. Simultaneously, Dr. Sam Watterman is recruited by top Government to help stop a plague from spreading, having wrote a piece on smallpox as bio-warfare early in his career.

On the surface, most people would unquestionably label Daria as terrorist, but Miller doesn’t make it that easy. He humanizes her and has her starting to question her beliefs, the organization she works for, and her overall lifestyle. Is she just a pawn? Meanwhile, Dr. Watterman, who would rather be at home with his ailing, questions why he has been brought into this adventure at all.

The Messenger blurs the line between terrorist and freedom fighter, power and corruption, good and evil, and morality. Throughout the narrative, Miller details almost every aspect of Daria’s life, from mundane activities such as brushing her teeth, to her transmitting her smallpox virus. This strategy allows the reader to have a very deep insight, though not necessarily a full understanding, of her character.

While I found the book to lag at certain points, overall it is a great story that accomplishes what any well-written narrative should: it makes us question and think about values and morals.

Born in North Carolina, Stephen Miller is an actor and writer. He has worked with Hume Cronyn, Robert DeNiro, Bette Davis, Burt Reynoolds, and has appeared on multiple episodes of the X-Files. He currently lives in Vancouver and is working on his next book. 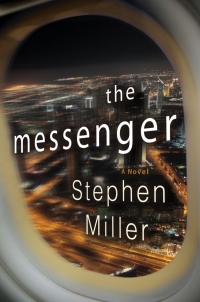