Magnified World is the first novel from Toronto writer Grace O’Connell. It’s not a bad first try for a young novelist. I was not blown away by her writing and I didn’t learn anything profound, but I thought was enjoyable and found myself getting into it more and more as the story developed.

The plot centres on Maggie,a freshly-minted university graduate, who runs her family’s new age store while trying to deal with her mother’s suicide. She starts having blackout and thus begins a journey of self-discovery, healing, and ancestral lineage. For a book that focuses predominantly on mental health, I was impressed by O’Connell’s ability to keep the novel relatively light in tone.

In order to remain objective as possible, O’Connell explained that she did not get a tarot reading (something Maggie does quite frequently) until after she finished writing. This might have helped her write from an outside viewpoint, but it also might have hindered the plot, without that insider’s knowledge.

In dealing the central character’s blackouts and mental health issues, O’Connell did visit some mental health hospitals, but again did not overly delve into that area so as to better gain Maggie’s perspective as she tries to heal her pain. (I would argue that O’Connell did much better at this aspect than the healing crystals – not that I claim to know a great deal about either).

For me, the most intriguing aspect of the story was whether or not a certain was a hallucination’s of Maggie’s. I asked Grace whether she thought that was a manifestation of writer’s block or other creative struggles that writer’s go through when they take on certain projects. She jokes that for the most part this is true.

Like many writers, O’Connell and her main character share a lot of similar traits and characteristics, though, as she explains, they differ in their approach to life. I would also argue that both Maggie and O’Connell are the same in that they are both trying to find their way – both as artists and as women. Though my reaction to the book overall was so-so and average, I get a feeling that women may enjoy it more so then men.

Grace O'Connell holds an MFA in Creative Writing. Her work has appeard in Quill & Quire, The Walrus, Taddle Creek, and EYE Weekly. She has taught creative writing at George Brown College and now works as a freelance writer and editor in Toronto. 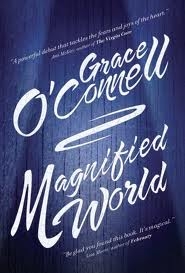