The book (Jian refuses to call it a memoir), is very witty and shows a musical knowledge very few other possess. From Bowie to Rush to Talking Heads and the Police, Ghomeshi serves up a smorgasbord of intellectual musicality to act as a backdrop for a skinny, confused immigrant teenager with gelled hair and a crush on an older schoolmate. Sounds like a great Canadian love story. Besides Bowie and Wendy (the name of Jian’s semi-unrequited older love), one thing 1982 tells us is Ghomeshi’s pension for making lists. Particularly short lists (or shortlists).

In addition to being rather witty, the host of Q on CBC also writes quite frankly and matter-of-factly. Whether it is about his sexual exploits (or lack thereof), his parents' move to the suburb and his worries about looking different, his musical aspirations (including being the youngest member of the Thornhill Community Band), or overall life in the 1980s; Ghomeshi doesn’t hide anything, while at the same time, does not release any shocking or untoward information designed to illicit a specific reaction from the reader.

1982 is a hilarious exploration into teen angst. And yet, it is so much more than that. It is unabashedly political, whimsical, reminiscent, and downright fun. Like many coming out of the CBC, Ghomeshi has a unique perspective, insight and personal style. A highly recommended read.

Jian Ghomeshi is the host of the cultural affairs program Q, on CBC Radio and TV. He is also the former drummer and singer of the new-wave band Moxy Fruvous, as well as the manager of singer "Lights". 1982 is his first book. 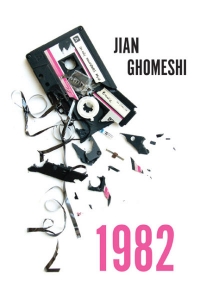