The Deception of Livvy Higgs is the fifth novel by Newfoundland-native Donna Morrissey. Through flashbacks, the novel tells the life story of Livvy Higgs, an eighty-year-old woman in Halifax who has spent years avoiding the painful memories of her youth. Over the course of one snowy weekend, Livvy suffers a series of heart attacks and finds she can no longer keep her memories at bay. As she drifts in and out of consciousness, she leads the reader through the secrets of her childhood on the yellow beaches of Newfoundland’s Sables d’Or, through WWII’s transformation of the Maritimes, and to her arrival at the very house in Halifax where she lives as an old woman.

Morrissey’s skill with voices immediately draws the reader into the past along with Livvy, and makes the sections of the novel set in Newfoundland a delight to read. All of the characters in Sables d’Or have distinct and thoroughly entertaining ways of speaking. There’s Mister Louis, a gruff Frenchmen whose speech is peppered with curses en francais, and his wife, Missus Louis, who showers Livvy with Irish terms of endearment. Most importantly for Livvy, there’s their grandson Henri, a boy born into a world of many warring tongues.

“Voice is everything. It’s so easy to fall into the one voice,” Morrissey told me when she was in Vancouver for the Writer’s Festival. “You have to become all of these secondary characters.”

The distinct voices help anchor each character in place and time, and they also help the reader adjust when frequent flashbacks swap the elderly Livvy’s neighbours, a social-work student named Gen and her son, Ronny, for the feuding French, Irish, and English characters from her memories. The dialogue crackles with life and wit, whether Livvy is listening in on Mr. Louis or trying to get Gen to reveal her own secrets.

The trouble with the frequent use of flashbacks is that both the past and the present have to compete for the reader’s attention. Morrissey admitted that this was something she struggled with while writing the novel. “What started happening about halfway through the book was that the past started getting really strong, and then it threatened to overwhelm the present,” She said. “So then I scrapped it all and went and started writing it in sequence, and it just didn’t work that way.” The novel is the result of four years of writing and rewriting, of “a dance around events and timelines,” as Morrissey puts it. And while the historical events depicted in the novel do help the reader figure out where he or she is in Livvy’s past, they also lend the flashbacks a gravitas that the present-day storyline never quite achieves.

Indeed, as Livvy succumbs to the allure of her past, so does the reader. Her adolescence coincides with the advent of the Second World War, and Livvy is witness to major milestones in Canadian history, such the riots which devastated downtown Halifax at the end of the war. At times, the parts of the story set during the war and pre-war periods are so gripping that it’s a surprise to reach the end of a chapter and be drawn back into the present. These shifts can be disorienting, and as the story of Livvy’s youth unfolds in more absorbing detail, they can be disappointing, too. In the second half of the novel, Livvy’s past becomes so engaging and so laden with historical significance that the smaller mysteries of her present life cannot hope to pique comparable interest. Even a shocking and violent incident involving Gen cannot raise the stakes enough for the present to compete with the drama of the past.

In the end, the reader is as helpless against the tug of the past as Livvy is herself. Right up to the last chapter, there is so much at stake for the young Livvy, while her older self’s story is nearly over. The novel’s ending feels inevitable (which is not to say predictable), and so the events of the present, including Livvy’s rapidly deteriorating health, lose some of their urgency.

More than anything, The Deception of Livvy Higgs is the story of a character trying to make sense of her life, past and present, as it is rocked by overwhelming events. As is the case in many a life, the past tends to cast a long shadow over the present. But in the case of Livvy Higgs, the life is still one worth reading about. The end of Livvy’s story cannot be understood until the truth of her past is revealed, warring nations, feuding families, mysterious neighbours, and all.

Donna Morrissey is the award-winning author of Kit’s Law, Downhill Chance, What They Wanted, and Sylvanus Now, which was shortlisted for the Commonwealth Writers’ Prize. She recently wrote a children’s book, Cross Katie Kross, illustrated by her daughter, Bridget. Morrissey grew up in The Beaches, a small fishing outport in Newfoundland and now lives in Halifax. 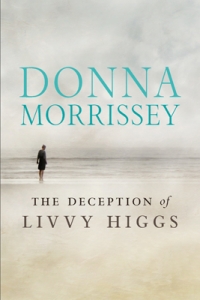