Y, Marjorie Celona’s debut novel, has been turning heads and generating headlines since its publication at the end of August. Since then, Y has earned a place on the Giller Prize longlist, as well as a spot on Maclean’s bestseller list. Despite her confidence in the novel, Celona never expected Y’s release to be met with such fanfare. “I thought that it would come out and people would be like ‘oh yeah, great,’ and it would be like a bird flying by your window,” she said when I spoke with her at the Vancouver Writer's Festival. “It’s been a crazy reception.”

In alternating chapters, Y tells the story of Shannon, a baby abandoned on the steps of Victoria’s YMCA, and her mother Yula. While Shannon’s story spans years, taking her from her discovery by a Y employee through a series of foster homes, her mother’s story has a much narrower focus, describing only the last few days before Shannon’s birth. Despite the vastly different scopes of the novel’s two stories, they never feel pieced together. Shannon’s clear and honest voice unites them well, and the even pacing ensures that the story keeps moving and that the reader is wondering about both women even when only one appears on the page.

I am hesitant to use the word “foundling,” to describe Shannon, even though that’s what she is. The word evokes a certain kind of story. A story of suffering. A story of tragedy. A story which is unpleasant to read. It is a word which gives former students across the English-speaking world trauma-flashbacks of being forced to read Tom Jones before they were equipped to make sense of Henry Fielding’s prose.

I don't want describe Shannon as a foundling because I don't want to give readers the wrong idea about what kind of book Y is. Yes, Y is a novel about suffering, and in some ways, it is tragic. But in no way do Y's themes make the reading of the novel unpleasant. Celona’s prose is fluid and clean, and Shannon and the novel’s other characters are rendered in such clear-eyed detail as to make them utterly relatable even in the direst of moments. Shannon’s young life is, of course, deeply troubled (especially when it comes to her relationship with one foster-father named Julian). Her mother’s story is also, understandably, a profoundly sad one. But even when these women are witness to or perpetrators of horrible acts, Shannon’s voice never falters, and the novel remains remarkably readable.

“It’s not supposed to be difficult,” Celona said, in reference to Y’s darker themes. “I don’t like a book that’s too much work. I mean, there’s actually no point. You can write a beautiful book and still make it easy to read.”

Y’s readability contributes to its beauty, and it gives the reader the space to consider the bigger questions -- the whys, not the hows -- that inform some of the novel's darkest scenes. It is a serious novel, rife with injustices and ill-fortunes, but even in its darkest moments, Shannon-as-narrator does not dwell. She simply carries the reader onward, bringing us closer to the point when (we hope) her story and her mother’s will converge. We are with Shannon on every step of her journey to find out where she came from, but we are with Yula as she comes to her choice to abandon Shannon, too. We know the details of Shannon's past before she does, but this does not negatively impact the plot’s ability to keep us interested in her journey. The mystery of Shannon’s origins, after all, is not about how she ended up on the steps of the YMCA in the first place -- the novel's first pages tell us how she got there. The intrigue comes instead from the myriad whys that lead Yula to her choice, and the whys that haunt Shannon through her childhood. It is often harder to ask why than it is to ask how. Why can be as hard a question to answer as it is to ask, but Celona does so beautifully and with great compassion for her characters.

Marjorie Celona received her MFA from the Iowa Writers’ Workshop, where she was an Iowa Arts Fellow and recipient of the Ailene Barger Barnes Prize. Her stories have appeared in Best American Nonrequired Reading,Glimmer Train, and Harvard Review. Born and raised on Vancouver Island, she lives in Cincinnati. 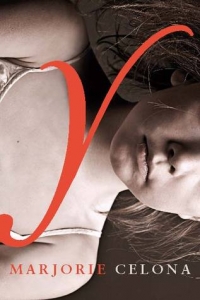 Children's Book Review: My Mouth is a Volcano