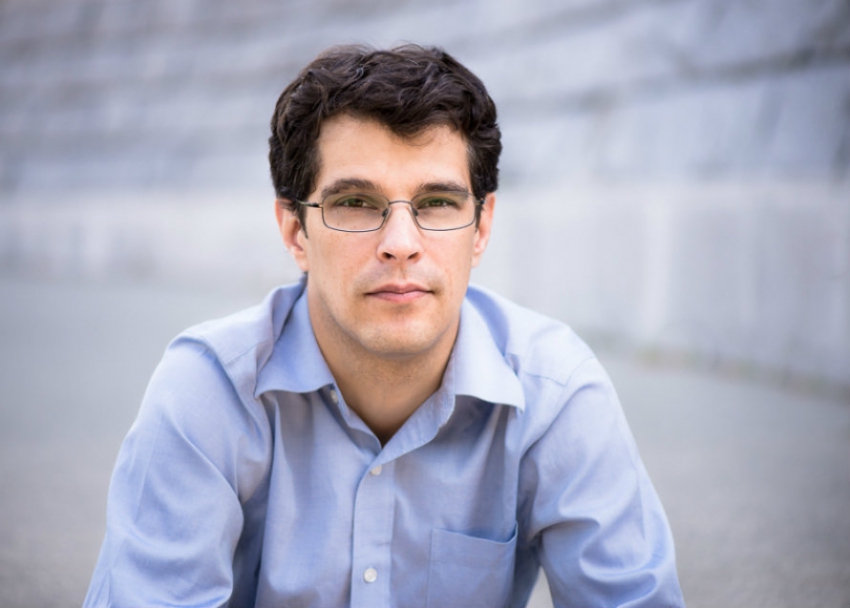 Steven Galloway's tale of Harry Houdini, spiritualists and a narrator whose memory can't be trusted.

Multi-award winning author Steven Galloway looks exactly the same in person as he does in his book jacket photo: smart, intense, slightly nerdy and curious.  As one of Canada’s rising literary talents — the author of Finnie Walsh, Ascension and national bestseller The Cellist of Sarajevo — I expected an edge of justifiable superiority. Not so. We met at the Wired Monk in Kitsalano, and he immediately was open and enthusiastic. We talked about his most recent book, published last year, The Confabulist, and his upcoming reading at the Chan Center.

My copy of The Confabulist arrived a day before our meeting, and though a thoroughly enjoyable read, I was tired that day. As I neared the end of the 300 pages, I was falling in and out of sleep, interrupting the words of Galloway’s narrator, Martin Strauss, with my dreams. When I told Galloway, he laughed and said, “Cool. That’s how it should be. The value isn’t that it is true.  The value is in the telling of the story and what the story actually means. How you get to the truth is kind of immaterial.” In other words, making up truths and confusing what is “real” follows his plan.

This is a complex, multilayered book that conveys a plethora of profundities, sometimes wrapped in contradiction, and is told by a narrator who is not intended to be trustworthy. Among the book’s messages is that our minds are prone to trickery, capable of confabulating, or of fabricating imaginary experiences as compensation for loss of memory. And just like in a magic trick, they are sometimes incapable of deciphering truth from falsehood.

At first glance, these ideas appear as a strange basis for a story. But maybe not. Storytelling is, afterall, a world of make believe.  Galloway quotes Aldous Huxley before opening his book, “Every man’s memory is his private literature.”  As in life, Galloway shows in The Confabulist that magic interwoven with memory, fiction or fact, creates an engaging story.

Galloway, an Associate Professor in the University of British Columbia’s Creative Writing Program, begins developing his novels with an idea. For The Confabulist, the idea sprang from a pivotal childhood memory.

“I had this general idea as a little kid that adults were terrifying. I didn’t like being around them. I remember my parents would have parties and I would hide in the basement.”  Then one day young Galloway had an interaction with his great uncle Johnny, the sharp dresser and excellent checkers player. “I remember him coming into the backyard. It was a hot day and he took off his coat and his fedora, and played checkers with me and let me win.” Galloway decided that all adults weren’t so bad. Many years later when he was in his mid-30s, he was looking through photographs and learned that his Uncle Johnny had died before he was born.

Galloway was fascinated by the creation of false memory. His research began. It didn’t take him long to realize that the most interesting people writing about memory were magicians or psychologist writing about magic tricks.

False recollection, Galloway believes, is like a magic trick. “If I were able to do a really great magic trick right now, you wouldn’t actually think, ‘Oh, wow, Galloway’s a wizard.  Right?’  No one thinks that…but you also sort of do. There’s a duality to it. You know that the person doesn’t have supernatural powers. You know it was a trick but if you don’t know how it was done. There’s that tiny, tiny possibility that something legitimately magical happened. It’s not an either/or. It’s both.”

The historical character who epitomized the duality and interplay that fascinated Galloway was magician and illusionist Harry Houdini. Houdini was a sort of self-created illusion. Born Ehrick Weiss in Budapest, Hungary, he re-invented himself as the most famous man alive, Harry Houdini.

“As a writer what I could do with Houdini was totally different because he was a made-up character, but he’s also someone everyone has heard of. You could actually have suspension of disbelief and also not. I couldn’t have written this book with a made-up magician because one of the exercises of reading it is wondering, did Houdini actually do this or is this a made-up part of the book— which, by the time you get to the end of the book, you realize is pretty woven into what the book is.”