21st annual Word Vancouver takes over the Library this Sunday 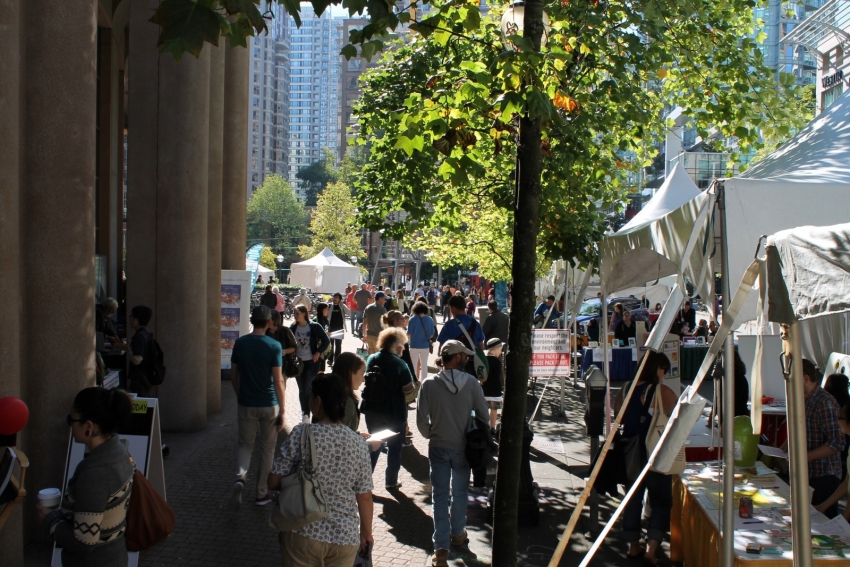 Vancouver Word Festival at Library Square is returning this Sunday from 11:00 a.m. - 5:00 p.m.  It’s free, fun and literally literary. Here is a day of picks to help with navigation.

11:20 Vancouver journalist and photographer Joshua Hergesheimer reads from his novel, The Flour Peddler: A Global Journey into Local Food from Canada to South Sudan. It's a non-fiction story about taking a microcapitalism venture in bicycle-powered grain milling from B.C. to a South Sudan rural women’s cooperative.

12:30 In 1974, thirty-two women were hired as mounted police by the RCMP. In Silenced: The Untold Story of the Fight for Equality in the RCMP, Bonnie Reilly Schmidt, formerly a surveillance specialist for the RCMP, draws on first hand accounts about these women navigating through a traditionally male institution.

4:40 Graphic novel writer, Michael Kluckner reads from his story Toshiko, a story of two Japanese Canadian teenagers marooned in the B.C. interior in 1944.

11:20  Sharon Shorty, the VPL Storyteller in Residence, was raised with story and weaves inspiring traditional tales from her Tlingit, Northern Tutchone, and Norwegian ancestry.

At 12:10 and 1:20 respectively: Julie Flett tells the story of two boys who love flying dragonfly kites – told both in English and Cree; and Robin Stevenson, who reads from The Summer We Saved the Bees, about a mother obsessed with saving bees.

1:30 Leah Horlick of For Your Own Good fame performs her poems that break silence and serve as a canon of lesbian and feminist poetry.

2:10 A stellar group of local writers including Fred Wah, Fiona Tinwei Lam, and Leanne Dunic talk about writing from life experience and how Ricepaper Magazine impacted their careers. Celebrating its 20 year anniversary, Ricepaper Magazine is where many of Canada’s most respected Asian writers were and are first published.

2:40 Stella Harvey reads from The Brink of Freedom about a young boy who disappears from a refugee camp in Athens.

4:30  Kelowna author Michael V. Smith reads from his book, My Body is Yours, which explores queer sex, gender identity and growing up in a small town.

For more information on the festival, please check out wordvancouver.ca.  There is lots more to see and hear.