Founder of Wikileaks initially agreed to work with ghostwriter, then backed out. And now he's mad they're publishing without his permission. 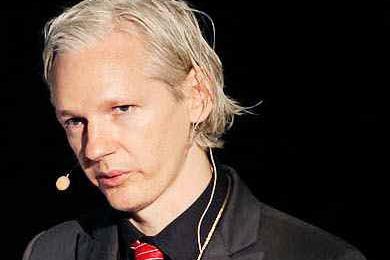 It may be the ultimate irony: the founder of Wikileaks, who has published secret after secret, is crying foul after backing out of a deal to sell his life story and then finding the publisher was going to press anyway.

LONDON -- A long-awaited memoir by WikiLeaks founder Julian Assange is finally being published -- without his approval.

British publisher Canongate said Wednesday that the book, billed as an "unauthorized autobiography,'' will go on sale in stores and online Thursday.

Canongate paid the 40-year-old Assange for the rights to the memoir last year, and he began working with a ghostwriter on the book, which he said he hoped would be "one of the unifying documents of our generation.''

Canongate sold rights to more than 30 publishers around the world, including Alfred A. Knopf in the U.S.

But Canongate said that as he recorded 50 hours of interviews about his life, Assange became increasingly troubled by the prospect, eventually declaring that "all memoir is prostitution.''

The publisher said Assange tried to cancel his contract, but since he had not repaid his advance it had decided to publish the first draft that the WikiLeaks founder delivered to the publisher in March.

WikiLeaks did not immediately respond to requests for comment.

Canongate publishing director Nick Davies said Assange's response to the decision to publish had been "close to outrage,'' but he said the WikiLeaks chief should be pleased with the result.

"It's the good and the bad of Julian in there, which ultimately does him some favours,'' Davies said.

"He has been portrayed as this Bond villain or a character from a Stieg Larsson novel ... but what comes through here is this very human portrait of Julian, warts and all,'' he said. "He's a warmer character than a lot of people will be expecting.''

In December, Assange said he didn't want to write a book, but had been forced into the deal to pay his legal bills and keep WikiLeaks afloat. He said the deal would bring in $500,000 from Canongate and $800,000 from Knopf.

Knopf, a division of Random House, said Wednesday that it had cancelled its contract to publish the book.

"The author did not complete his work on the manuscript or deliver a book to us in accordance with our agreement,'' spokesman Paul Bogaards said in a statement. "We will not be moving forward with our publication.''

WikiLeaks and its silver-haired frontman shot to worldwide prominence with a series of spectacular leaks of secret U.S. material, including the publication of about 250,000 classified State Department cables.

Assange has gained global fame as the face of WikiLeaks, but also has fallen out with many former allies, and with media partners, which had helped edit and publish the site's trove of secret documents.

Canongate said the book traces Assange's life from his Australian childhood through his time as a teenage computer hacker to the founding of the secret-spilling website.

It said the book is, "like its author, passionate, provocative and opinionated.''

The Independent newspaper, which will run extracts from the book starting Thursday, said the memoir also deals with events in Sweden in 2010 that led to allegations of rape and sexual molestation against Assange by two women.

Assange is out on bail and living at a supporter's mansion in eastern England as he awaits a judge's decision on whether he will be extradited to Sweden to face those allegations. A ruling is expected within weeks.

Wikileaks deconstructs the world as we've known it