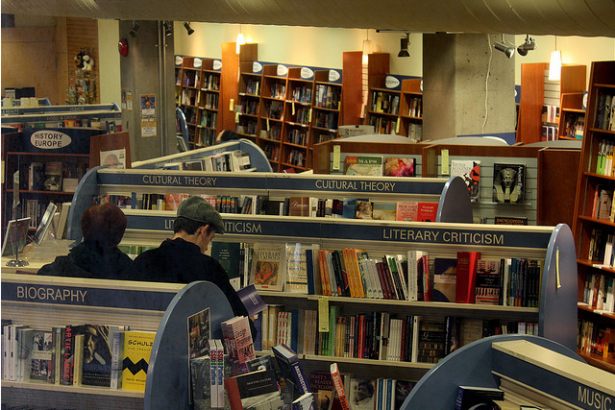 What's in a name? When UBC Bookstore circulated an email about its plans to change the name to "UBC Central" in August, it set off a storm of negative feedback from both within and outside the UBC community.

Books are symbolic of learning, critics argued. Removing the word "bookstore" from the campus bookstore, in their view, would alter the university's main purpose of learning. The criticism became so widespread that the renaming has been put on hold until later this year.

Creative writing professor Dr. Ray Hsu discussed the meaning of this name change in Vancouver Observer last week, and we decided to get a follow-up from both sides of the issue. More than simply a UBC issue, the bookstore's renaming controversy cuts to the survival of the book industry as a whole.

Debbie Harvie, managing director of University Community Services at UBC, was surprised when the UBC bookstore's name change prompted such a large outcry.

"We started the outreach to departments across campus, our staff and students ... a year ago to discuss a name change," she said. She remembered that at the time, "no one expressed overt concerns" and the name was approved by the UBC's executive committee.

"When we announced the name across campus, we were surprised by the response to a name change and the attachment to the word 'bookstore'," she said.

More than 800 people, ranging from UBC staff and students to professors from other universities, voiced their objection to the name change in an online petition.

"Books and their link to academia are an emotive issue," Harvie said. She ensured that the renaming was not about distancing the bookstore from books, and that among university bookstores, UBC Bookstore has been proactive about expanding their books.

“ We are the largest campus trade book store in Canada and the fourth largest in North America,” she said. “Many others have reduced their selection, whereas we are trying to retain and build upon it.”

Kim Snowden, a Women and Gender studies professor who started the online petition, argues that any removal of the word “book” implies a dissociation from books.

“Regardless of what you sell, a bookstore that is not called a bookstore suggests it is something else entirely.  As they say on their website, a one-stop shop,” she said.

The name “Central,” was unnecessary, she said, as a bookstore was already meant to be central to university students.

“No one understands that UBC Central sells books or, in fact, what it is at all,” she said, adding that many people were confused by the new name when it was proposed.

"If I saw a sign for UBC Central, I wouldn't know what it meant!" wrote Maureen L. MacDonald, a UBC graduate, in the comments section of the online petition.

"UBC Central sounds like a bus station, not a place to buy anything of value to an academic community," wrote Midge Oke, a retired teacher.

Despite the criticism, Harvie said that much effort went into choosing a new name for the bookstore.

"This project was not taken on lightly," she said, saying that she and her colleagues reviewed over 100 names before settling on UBC Central. The name was chosen, according to the UBC Bookstore website, because of the bookstore's central role in students' success and its location in the heart of the campus.

For the moment, Harvie said that the name "Central" is being put off until alternatives are discussed with students in September.

A changing reality for bookstores

Harvie recognizes that books have long been regarded as a symbol for learning. However, the business of paper-based books is also undergoing a massive change.

In the U.S., major bookstore chain Borders went bankrupt in February, while Amazon.com announced that e-book sales for its electronic reader, the Kindle, now surpassed is print book sales.

"What we deem a book today, will probably change dramatically over the next 10 years, particularly in the field of learning, where they will morph into more interactive electronic formats,” said Harvie.

Contrary to suggestions by some people who signed the petition that UBC Bookstore was “selling out,” Harvie said that the name change was to ensure that the bookstore’s continued survival and adaptation to the times.

"We have seen the demise of independent and large bookstore chains who failed to diversify their business models or did so too late," said Harvie.

She said that UBC Bookstore was seeing “significant decreases in book sales” and began discussing the causes.

“One of the discussion points was our name which we felt reflected neither what we sell nor the services that we offer,” she said. “Our name change is one of our strategies to address our changing market.”

Snowden, meanwhile, said she understands the reality that bookstores are disappearing because of their inability to compete with new technologies and the changes in the book publishing market. For her, however, a bookstore's physical survival isn’t relevant if it loses its original essence and function.

"This is what has happened to many other bookstores -- they are no longer recognizable as bookstores,” she said.  “They are Walmart-type stores that also sell books, online or otherwise.  A campus should not be like this."

Snowden said that Harvie and other UBC Bookstore staff have been open to discussion, and that they have met on numerous occasions to discuss alternatives to the name change.  UBC Bookstore will be holding a wider survey with students when they return to campus in September and hold another open house near the end of September to gather input.