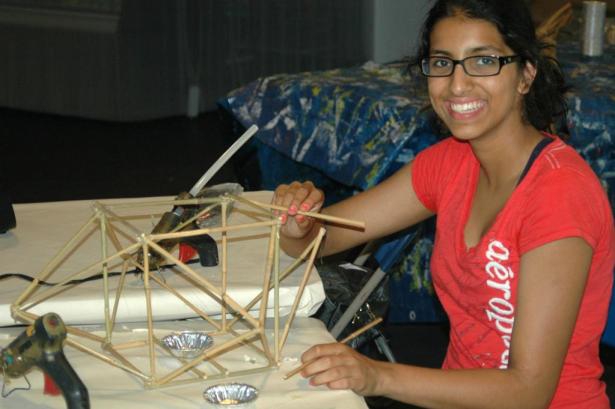 Manpreet Deol creates a lantern frame before papering it, during a Public Dreams workshop at Trout Lake Community Centre. Photo by Kerry Hall.

Get ready to let your bright light shine at this year’s Illuminares festival on Saturday night in East Vancouver.

The Public Dreams Society renews its participatory art event July 21 at its traditional neighbourhood venue in Trout Lake Park. Community members are invited to become part of the spectacle by bringing their own lanterns.

The non-profit organization installs large-scale paper lanterns around the park, like the Shadow Box: A City of Lanterns spearheaded by guest artists Mere Phantoms from Montreal. Additional entertainment includes live light painting by artist Mitchell Soulfeather, music from the Song Bird choir and The End Tree ensemble, a lantern procession, and a fire show by Radiant Heat.

Folks can make a lantern at home, like this milk carton version, or attend the final studio workshop at the Trout Lake Community Centre on Friday, July 20 from 5-8 p.m.

Teenager Manpreet Deol, along with her mom Kanwal and her two younger siblings, came out to a workshop for the first time this year after attending the festival two or three times before. In past years, they’ve just walked around but this year they wanted to get more involved by making lanterns.

Illuminares runs from 6 p.m. until 10:30 p.m. Suggested donations to keep the festival returning are $5 minimum. Public transit is the best way to get there as neighbourhood streets will be blocked off.