Mumbai artist maps out web of wire at VAG Offsite 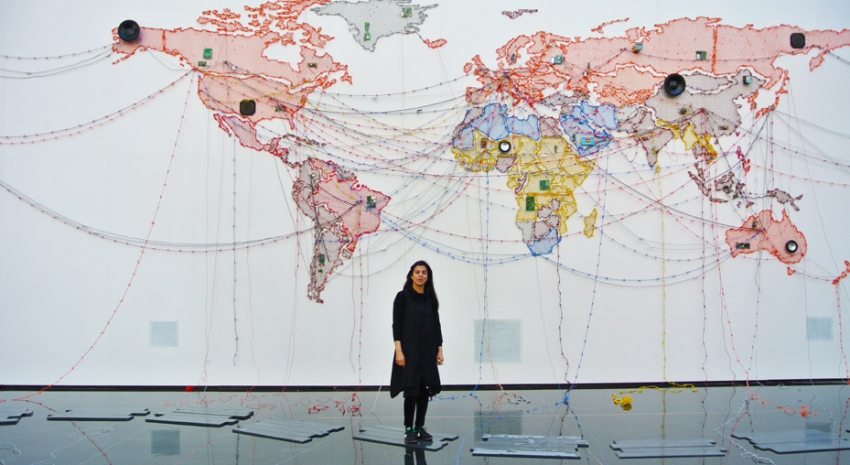 In the shadow of the Shangri-La Hotel and behind the chainlink fence encircling the public plaza on West Georgia Street, Kallat’s latest work, Woven Chronicle, is a reincarnation of her piece that had been displayed for the Goteberg International Biennale of Contemporary Art in Sweden. Curated by VAG assistant curator Diana Freundl, the public installation is the lead-off to Vancouver's Indian Summer Festival, July 9 - 19.

The Mumbai-based artist, visiting Vancouver for the first time, was pleased to see her work displayed in this new context and offered a sneak peak into her process the day before the unveiling.

“To have a new afterlife for the work is really quite special,” said Kallat. “It brings new meaning to this site and that adds, for me, another dimension to the work.”

The installation deals with worldwide borders and barriers. The rendering of the world map is treated like a piece of embroidery, suggesting the knitting together of different cultures. Flight paths drape over the countries, tracing the flows and movements of migrants historically. Wires stand in place of yarn, carrying with them the inherent contradictions of travel. While the telephone wire suggests the transmitting of energies and exchange of ideas, the strands morph into barbed wire and fences — a reminder that the world may not be as open as it seems.

“On the one hand there’s movement like no other moment in human history,” she said, “and yet these borders are also more controlled.”

Woven Chronicle embodies a history of labour migrants in particular, those who moved in the wave of rapid industrialization, an idea that is fortified by the rich soundscape of factory sirens, ship horns and high voltage electrical current accompanying the piece. The work serves as a reminder that these past migrations have resulted in the cultural exchanges that define our population today.

“The industrializing of societies has really been a marker of change for societies,” she said. The artist hopes the piece will hold resonance in this city with such a reputation for multiculturalism and history of immigration.

“I think it’s especially so appropriate for Vancouver which really draws in several different cultures,” Kallat mused as she wound a ball of barbed wire. As an outdoor exhibit, the work becomes a part of the city’s character, making it all the more symbolic.

“To be able to work with Offsite was truly something that I love most because in India we don’t have many institutional places that draw in the larger public,” she said. There the public’s access to art is severely lacking, she added, making it difficult for the artist to reach out to her audience. Kallat has a simple longing to “see passersby stop and witness their curiosity of what this piece means.”

“Here people respond,” she said. “If they don’t like something they come forward and they are really vocal about that, which is a great thing to have a conversation. It’s not simply about appreciating it, but having a say.”

The fence came down on May 14 and Woven Chronicle is now open to the public and will be on display until Oct. 12. In that time, Kallat said she hopes people who visit the site or pass by will find their own relationship with it, whether that is simply crossing the stepping stone path over the water feature or using starting a conversation by pointing out places from where they may have travelled.

“People can come forward and touch it, feel it. It doesn’t have to be something that is high art, intimidating, within the confines of a white cube,” she said. “The purpose of being outdoors is that people should feel free to come forward and express themselves, so I look forward to whatever reactions come my way.”