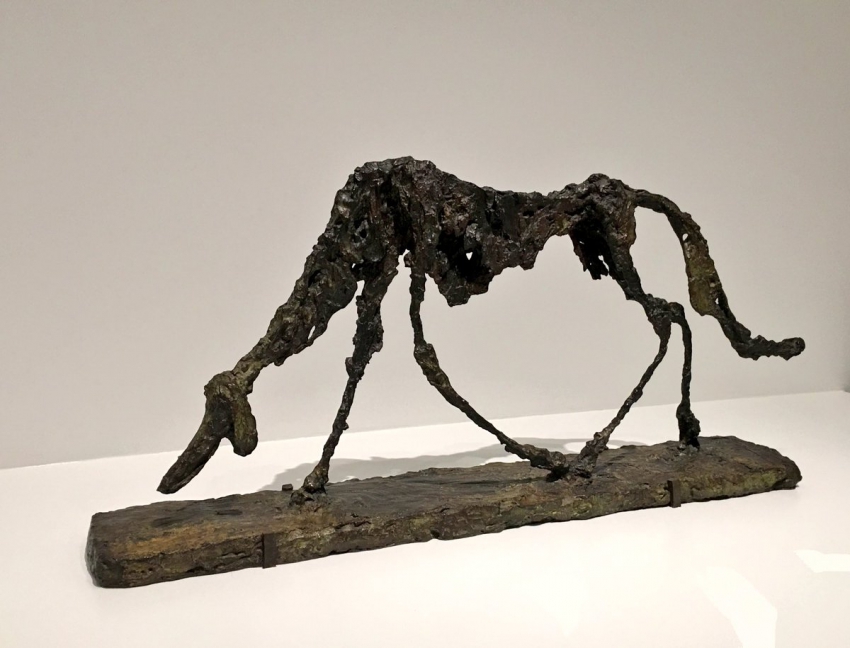 The headline quote, above, comes from absurdist playwright Samuel Beckett, prolix “voice” and walking companion of the famously taciturn sculptor/painter Alberto Giacometti on their long midnight rambles through post-World War II Paris. The line comes from Beckett’s most famous play, Waiting for Godot, for which Giacometti designed the iconic stage set: a lone, bare, blanched tree.

Beckett assigns the line to one of Godot’s protagonist clowns as a petulant shrug against encroaching amnesia. But “no lack of void” just as readily describes the signature style – massive, yet spare and attenuated – of Giacometti’s most celebrated bronze figures, on show now through September in the Vancouver Art Gallery’s premiere display space.

“He’s always pinching, always subtracting, never at rest or ready to let something go,” says VAG Senior Curator Bruce Grenville, who arrayed the exhibit to fill the Gallery’s entire ground floor. He points to a documentary video of the sculptor at work just a year before his 1966 death (at age 65).

Giacometti, in tweed jacket and tie, tweaks and scrapes tirelessly at a clay model in his dusty studio, a lit cigarette in his febrile, restless hand. “Somehow, when I’m sculpting, the more I take away, the bigger it gets,” Giacometti murmurs (in French). No lack of void, indeed.

He was lonely, but hardly alone in his edgy urgency. It was the prevailing mood among Paris intellectuals, Giacometti’s friends and fellow-modernists like Beckett, Jean Genet, Simone de Beauvoir, Jean-Paul Sartre.  After the trauma of World War II, how to fathom the catastrophe of Europe and the world? What does it say about humanity, or just sheer reality? How to move on?

With such a burden of angst, pre-War artistic preoccupations – abstraction, cubism, surrealism – seemed, by contrast, thin and arid. Giacometti had steeped himself in these movements when he first came to Paris in the 1920’s; the VAG show includes eminently creditable works from this period, testimonial to his eclectic curiosity and growing skill.

But he was already veering away from such derivative styles when he quit Paris to ride out the Nazi occupation in the neutral haven of his native Switzerland. And it wasn’t until his return to his Montparnasse studio in 1946 that he began to earn worldwide recognition for the knobbly, spindly sculptures that came to define his vision: human figures, heavily rooted at the base, but tapering all the way up to sheer inklings of gestural dynamism.

Giacometti had hit his stride – literally, in the case of some of his most famous male images, which tend to be pacing their pedestals at full-tilt. One such statue, Man Walking (Version I), enjoys pride of place at the VAG, dominating a chamber of its own, right at the nexus between the east and west lobes of the ground floor display space. Grenville recommends Gallery visitors to angle for some alone-time with this figure, if they can dodge the crowds (try weekday afternoons). That way “you can really feel its imposing presence.”

No less imposingly present are Giacometti’s female figures, but in a hauntingly static way. They stare you down, front-and-centre, rising from characteristically massive bases to culminate in compact heads with piercing, deep-set eyes.

Asked once by Jean Genet why he portrayed males and females so differently, Giacometti explained that women seemed to him “naturally more distant” – all the more striking since, in line with his commitment to draw and sculpt from life, he repeatedly modeled his work on such intimates as his long-suffering wife, Annette, or his quondam lover, the English artist Isabel Rawsthorne.

His most frequent model, though, was his younger brother, Diego, subject of his earliest sculpture at age 13 (on show now at VAG). The two brothers shared the Montparnasse studio and Diego, an artsy furniture designer, helped build armatures for some of Alberto’s architectonically challenging sculptures.

Self-portraits also crop up a lot in the VAG show, so much so that it’s tempting to imagine some of the elongated male striders as the sculptor’s vision of his own artistic quest. Maybe so, Grenville allows, but, for him at least, Giacometti’s most convincing – albeit unacknowledged – depiction of his own mind-set might be as a long, lean, snuffling bloodhound (image above) – nose-to-the-ground, hot-on-the-trail, loping through the Parisian night, a “solitary hangdog.”

Solitary, perhaps, but by no means hermitic. As his post-War fame spread, the Montparnasse studio became a place of pilgrimage for “existentialists,” artists and collectors from all over Europe, especially England. The Sainsbury family, heirs to a British grocery fortune, emerged as principal collectors; their trove comprises the core of the 133 objects on display at the VAG.

Just over half the objects are by Giacometti himself. Others may be highly stylized ethnographic or archaic statuary that influenced him, including African, dynastic Egyptian or Bronze Age Cycladian pieces. But by far the preponderance of non-Giacometti works in the show are by contemporaries that show the influence of the Montparnasse maestro.

Some of the influences are obvious at a glance – the attenuated bronze sculptures of William Turnbull, Dame Elisbeth Frink or Eduardo Paolozzi; the maquettes of Lynn Chadwick or Bernard Meadows. Some are biographical or stylistic, like Francis Bacon, who shared with Giacometti a cubic framing of his portrait subjects and a penchant for Isabel Rawsthorne both as a model and a confidante.

And some of the influences – perhaps the most durable and farthest reaching – are more conceptual. One whole wall is given over to Giacometti’s drive away from pure abstraction in favor of a renewed commitment to live modeling and explicit “materiality,” Grenville explains. This here-and-now concreteness finds echoes in works as diverse as a Dubuffet assemblage of found objects or a scrap metal rondel by César.

Grenville pauses before a Frank Auerbach portrait head rendered in writhing gouts of color, either squirted straight from the tube or laid on thick with a trowel. “How’s that for materiality? Sixty years old, this canvas, and I'm not sure the paint is even dry yet.” 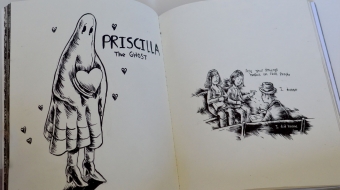 Art Review: The Ghosts We Know

Over the last year and a half, the Untitled Art Space in Chinatown has become the go-to spot for showcasing the versatility of Vancouver’s art scene. That continued this week when the space featured...
Allison WhiteJun 8th, 2016
Speak up about this article on Facebook or Twitter. Do this by liking Vancouver Observer on Facebook or following us @Vanobserver on Twitter. We'd love to hear from you.