Art Review: The Ghosts We Know 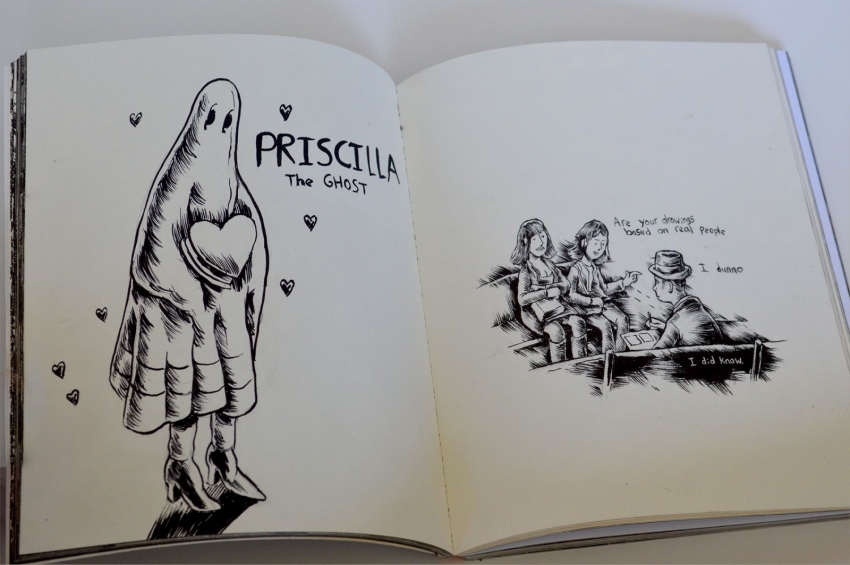 Over the last year and a half, the Untitled Art Space in Chinatown has become the go-to spot for showcasing the versatility of Vancouver’s art scene. That continued this week when the space featured work by artist Sean Karemaker from his debut book The Ghosts We Know.

The book started as a diary comic.

His career in graphic and video design began after a childhood steeped in reading and writing comics, and his body of work now includes sculptures, comics, scrolls, and paintings which have been exhibited in galleries and spaces across Vancouver.

“I was working as a commercial artist and it was something I was doing as a hobby, and I started showing it to my co-workers. They got interested and then I started making a blog. People started to follow, which led me to self-publish comics and finally a publisher (Conundrum Press) approached me to do a book,” says Karemaker.

Karemaker presents stories of his small town British Columbia upbringing contrasted with downtown Vancouver bus riding adventures - between stories of parties, drawing in cafes, school misfits, street people and life - layering on a narrative of ghosts, both known and unknown.

Personal narrative is a common thread throughout the book; the poetic snippets in Ghosts engage the reader with a strong sense of familiarity, given the universal themes childhood and adulthood within the tale.

Narrative flow is important to Karemaker’s work. There are no panel borders within a comic; images and text are intertwined into one another. He starts by drawing the artwork as a large-scale scroll, then in order to plan out pages he composites the scroll on the computer, which is then projected onto a large sheet of paper, to be redrawn.

To say there is insurmountable detail within each comic is an understatement.

His writing cuts to the core of insecurities and observations that we all experience, and provides comfort in the unknown. Illustrated perfectly in a panel depicting ‘the Man’ driving down a winding mountain pass:

“In some ways I have to believe in the ghosts, an integral part of my childhood experience. They were something exciting; they were a reason to create – to draw – to write and to speculate endlessly. I was shy, and they were my friends – in that quite subdivision out in the woods. The ghosts are real. The ghosts we know.”

The large scrolls, smaller drawings, and some process work of the original art used to make the book were on display at Untitled. The scale of the drawings allowed for an immersive experience, pulling the viewer in with each fresh stroke of ink.

It’s evident that Karemaker has found a strong voice, and more stories to tell. He is currently working on his next book - about his mother and her childhood growing up in an orphanage.

Paperback copies of The Ghosts We Know are available through his website.