From City Hall's perspective, both the arts, and affordability, are definitely on the radar. The question, however, is how to overcome the current crisis.

“We give out $10.2 million a year in grants, and the number asking for that money goes up every year,” says City Councillor Heather Deal, who is the point-person for arts and culture at City Hall. “(But) the charity system won't support arts as it has in past.

“Art needs to be more self-sustaining, but that means . . . you have to make consuming art a high priority, so artists are paid. People say, 'Just give us an affordable space.' The city really doesn't have the resources for that; the land is so expensive. We're trying to use tools we do have for affordable space.”

Those tools, Deal explained, include working with developers to create art spaces – “but it's not cheap” – searching for city-owned property for studios, and relaxing some zoning and safety regulations (such as lane-way houses and liquor permits).

Deal also pointed to the new Arts and Culture Policy Council, which was announced in February. Currently selecting 15 members from nearly 200 applications, the council is intended to help artists communicate with the city.

“That's the first time in long time we've had the voice of artists in City Hall,” Deal said. “That's a big change. To be successful as a city talking about creativity, you have to give artists a direct line to us.”

While the current City Council has done wonders for arts funding and grants, Garossino responds, it has been too “timid and squeamish” when it comes to tackling Vancouver's real estate problems.

“Almost every other major government in world that is encountering the kind of affordability crisis Vancouver is, is acting,” she said. “The idea that we are slaves to market forces and market pressures is a complete fiction.

“We're slow on the uptake on this one. I think there's a real fear on the part of the civic government to deal with the international super-wealthy. Real estate has performed in select markets like Vancouver spectacularly well, and this has driven up the price. We are part of a global trend.” 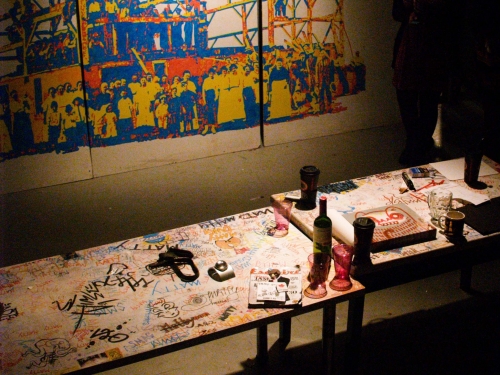 Garossino herself, at one point, sat on the board of the Alliance for Arts and Culture, a 26-year old organization pooling the diverse range of creativity in the city, offering services to its members, and advocating to government.

“The cost of living is one of the biggest challenges we have to deal with in Vancouver in the arts community,” said Rob Gloor, the Alliance's Executive Director. “It's just very difficult to sustain one's livelihood.

“When organizations are under-resourced or underfunded, and operating in a very, very expensive environment, they certainly don't have capacity to be competitive in attracting and keeping the best talent. It's certainly not just the visual arts – all of the arts have to cope with the tremendously high costs.”

But amidst the rising costs – not to mention the recent closure of the Playhouse Theatre – Gloor believes there's a silver lining.

“The incredible number of artists here, the number of activities, the diversity of artists and organizations, and the type of art that our community has available – all of these are great assets,” he says. “It's a strong symbol of the resilience of the arts community here.

“I think there are many companies doing wonderful work here that demonstrate very clearly the positive future we have for the arts in Vancouver.”

Though some have left, for the artists and makers who are committed to staying in Vancouver, the way forward is to continue promoting and discussing the importance of culture.

“I'd hate to see the conversation stop . . . and for the city to continue on a trajectory of becoming more sterile and emptied out,” Armstrong says. “We need to focus on cross-pollination, on temporary structures, on partnerships and collaborations – creative solutions to the very strange problems that we have.”

A city without artists, others concur, would be a bleak one indeed. And solutions, Smith reflects, must be fought for, not handed out on “silver platters.”

“I've lost a lot of fellow creatives and artists to other cities, and many have gone back to school because of the state of the job market,” she says.

“Myself and a few others have taken personal risks in order to counteract this effect, and root something that will change things in our own community. That's what's keeping people here. It's up to us.”