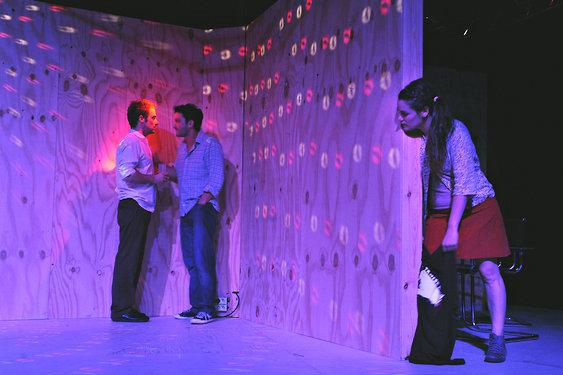 El pasado es un animal grotesco, a highly anticipated show presented by PuSh Festival, opened with a full house -- and an hour delay due to technical issues-- at the SFU Woodwards’ Goldcorp Centre for the Arts.

This marks the return to Vancouver for Argentine theatrical director, Mariano Pensotti. Last year, he illuminated Gastown streets with his installation “La marea” (The tide).

It's 1999. An aspiring film director, Mario just moves in with Dana, whom he is very passionate about. They have sex anytime, anywhere and also watch old films by Jacques Demy. Pablo, a marketing student an amateur writer, gets a disturbing anonymous delivery – inside, the package he finds a severed hand holding a pen. Laura feels imprisoned in her family home, and steals her father's savings to flee to Paris with her boyfriend. Vicky, an upper-middle class girl, discovers photos of her travelling father with a “parallel family” that lives in the countryside.

Pensotti narrates freely the stories of each character -- through actors Pilar Gamboa, Javier Lorenzo, Santiago Gobernori and María Inés Sancerni -- interlacing the situations in a precise space and time. It explores the lives of people aged 25 and 35, people of his generation in a 10 year span, reflecting on “the defective registry of a decade.”

One man's garbage is another's treasure. The catalyst for the El pasado was found in damaged photos Pensotti -- depicting mostly Generation X youngster, just as himself -- collected from a photo lab that disposed them near his home in Buenos Aires. Inspired by Honoré de Balzac takes on photographs and souls and the complexity of the spirit the XIX century literature, Pensotti tells stories (fictional and real) and the many ramifications of them as a sort “world novels” that emerge from each character framed in a specific time with a high dose of drama, but also humour.

El Pasado is set on a circular plywood stage that slowly rotates clockwise, as reminding of the passing of time and it is divided in four sets that becomes multiples scenarios and locations. The show includes subtitles in English. The title of the song was taken from the 11-minute song “The Past is a Grotesque Animal” by band of Montreal, which is played towards the end of the play. Other pop music (such as Forever Young by Alphaville) and folk tunes serve as a background for the play.

Pensotti's work effectively attains a cinematic feeling. An actor takes the microphone and narrates the moment. The thespians jump from a scene to another with athleticism, showing restless versatility to juggle in between many characters and situations in real time as the stage rotates.

The play invites audiences to peek onto the struggles of a generation, their pursuit of happiness and freedom, their need for answers in the middle of an acute economical and social crisis at the time without relying on any stereotypes. Pensotti shows how this past (and the old version of self) seem to vanish becoming far and strange, almost fictional as it never existed, while time mercilessly goes by.