2011 Vancouver Municipal election: Party has renewed its promise to create new artists' spaces and ease bylaw and zoning rules. But with costs rising, will it make a difference for artists? 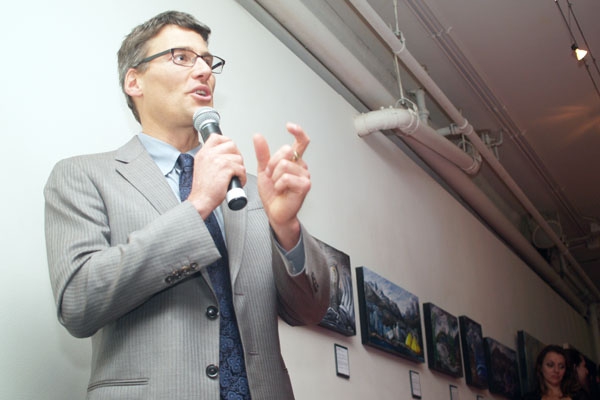 Mayor Gregor Robertson, a musician himself, welcomed artists' to an event at Gastown's Canvas Lounge. Photo by David P. Ball.

“We've been operating under what I call passive negligence,” Deal told the Vancouver Observer. “We allow old, run-down buildings to be used outside their zoned use because it puts people into them when they'd be empty, and because it supports the arts that we love.

“But as the value of those buildings is going up, that's not working any more. People are being evicted. We have to actually change our bylaws to support them.”

The scenario Deal described is exactly what happened in October when the Red Gate – a large artist-run space on Hastings – was evicted by the city after its landlord failed to complete health and safety upgrades that included installing lights near fire exits.

The eviction came despite the fact that the artists who had rented the building for seven years had completed many of the improvements themselves. Dozens of artists – including the well-known indie band the New Pornographers – used the space and held events there. On Sept. 22, tenants wrote a letter to the city accusing it of issuing unilateral ultimatums without regard to tenants' efforts.

Asked about the Red Gate, Deal said: “I'm actually really angry; it would have been the perfect test case for us. It broke my heart. I couldn't save it.”

Deal said she will speak to the building's new owner and try to convince them to stand as a test case for Vision's artist rezoning plan.

“If the landlord doesn't want to play ball, there's not much we can do to force them to,” she said. “That would have been a perfect test case for our new program. We could actually work on the rezoning to make sure they're legally there, as opposed to squatting in an office building.”

Hosted by Canvas Lounge, the Vision Salutes the Arts event showcased artists' work and brought together creative types from many fields – painters, sculptors, musicians, photographers and others – to meet the party's candidates and share concerns about arts support in the city.

Johnny Taylor, a painter attending the Canvas Lounge event, told the Vancouver Observer that conditions for some artists in the city are so bad that he is considering leaving to pursue his career.

“There's been a huge change really fast and the tables are turning, but we're still stuck with arcane bylaws that haven't been revamped,” said Taylor, who has a studio space on the fourth floor above Save-On-Meats on Hastings. “Bylaw officers are enacting things from 35 years ago – fucking stuck-up oligarchs, it's just ridiculous. That's why I have made sure I keep under the radar and do whatever I have to do.

“This is all I know about the City of Vancouver: I've succeeded in spite of it, not because it's supported me in any way or supported other artists in my position. All I know is that, as an artist for the last 10 years practicing in Vancouver – mostly the Downtown Eastside – almost every studio situation that I've had would have been illegal, I would have been removed from. I found ways to make it happen in spite of the city structure.”

Taylor described two previous studios he lived and painted in. The first was a two-car garage below a business. He installed a shower and slept on a foam mattress on the floor. To cut down the $1,000 rental cost of the space, he rented out a corner as parking space for two snowmobiles.

The space he lived in before his current single-resident occupancy (SRO) in the Downtown Eastside was shared by dozens of artists in small spaces sharing common amenities, Taylor said. But bylaw inspectors refused to give the building a pass until the artists dropped the toilet down eight inches from a raised platform it was sitting on, he said.

“We've got to waste a re-plumbing job of hundreds of dollars because our toilet was put on a throne?” he asked. “The only people who would dare be in that rat-infested hole are artists – it was that close to be condemned.

“That's preposterous, to put the toilet on the ground instead of an eight-inch platform – are you serious?”

Mayor Gregor Robertson, who attended the event, said he considers the arts an essential part of Vision Vancouver's re-election platform – not only for art's intrinsic value, but because the arts attract entrepreneurs to the city.

“What you do drives the economy and the spirit of the city,” he told the artists in attendance.

“We're looking at every opportunity to find affordable space for artists to do their work,” Robertson told the Vancouver Observer. “Affordable housing is connected to that, so it's another huge priority for us and it's also essential.”

Robertson, who plays the tuba, noted that he hasn't had time to jam during the election campaign, and that he's looking forward to Nov. 20 and the election being over.

“Music is a release for me,” he said. “I just get little windows. I wish I could do more. No time.”

All major parties in the election campaign have announced their support for the arts.

The Non-Partisan Association (NPA) promised to create two developer-funded endowment funds for arts and “cultural infrastructure” and will offer the Vancouver Art Gallery the entire block of 688 Cambie Street to use as it sees fit.

The Coalition of Progressive Electors (COPE), which has a cooperative agreement with Vision this election, announced it would push for an Endowment for the Arts similar to the Canada Council for the Arts that funds many projects; if elected, the party will push for an audit of artists' spaces in the city, aiming to create new venues and protect existing ones.

The promises have left some artists unimpressed.

“I am tired of people going on about 'we support the arts,'” said photographer Esther Rausenberg. “What I wanted to see from Vision Vancouver is something tangible in terms of the arts.

“When you say you're going to develop artists' studio spaces, I want a number. And they gave me a number – they said 10,000 square feet. That is something concrete that we can now hold them to account for.”

Many acknowledged the financial crisis has put pressure on arts funding, but emphasized the importance of artists for the city's quality of life.

“[Art is] a thing you can't put a dollar value on,” said Vance Campbell, owner of the Canvas Lounge. “It has to do with people's ability to create something out of nothing. It doesn't matter if you're a musical artist or a sculptor or a painter – it all comes from inside, in your spirit.”