"How are sales going at Olympic Village?" I asked Rennie, as I put the last touches on this article, four months after my formal interview with him.

"We are just approaching 240 homes closed (paid for) and well over 150 million in sales and we will launch our fall sales campaign September 25th," he answered in an email.

"When will people be moving in to social housing units?"
"I am not in this loop..word is mid October," he said.
What did he think about Mayor Robertson's performance?

"You know what we all forget...is Gregor took the helm during the worst economic downturn that most of us will experience in our lifetime. And good on him for carrying through with his housing and green initiatives when others would have succumbed to rhetoric. The way I see it is Gregor holds future values and isn't just waiting for yesterday to come back."

In talking about the mayor, perhaps Rennie is also reflecting a little of how he sees himself.  He had to market the Olympic Village during that "worst economic downturn that most of us will experience in our lifetime."  That was the year the housing bubble popped, at least for a moment. He kept moving forward. He didn't look back.

"With the  Olympic Village,” Rennie said, “I had a philosophy on the economy and we went to all of our developers and said if you're not pregnant abstain.  Stop.  Don't build.  I couldn't figure it out.   I also had a philosophy that if you were still standing in September '09, you'd made it through,  that the world would have stopped creating financial problems and we'd be on the road to recovery."

That didn't turn out to be the case, and the Olympic Village became "a financing nightmare."

"Something I never calculated was that Canada lost confidence based on what was happening in the rest of the world and I forgot that metric.   As that came to light at the end of '08, my advice to the developers was, let's stop marketing.  Let's just keep the ball in the air and stop marketing.

"As we got thru to Feb. 09, the city and developers saw the wisdom of that.  If we had sold, then I don't think you could have guessed at the losses. There was nobody to buy it.

Rennie said that at the time The Sun and the Province "were having a race to see who could print the evilest story on the Olympic Village."

The project had recovered, he said, because the market came back more than anyone else could have imagined.

"Our new marketing is to say that there is no competition.  Vancouver is the greenest community on the planet. The Olympic Village is on the water. The units have subzero refrigerators and nine foot ceilings and offer a real community. You can walk to transportation and walk to work.

"Location, location, location--- we've got it. It's always going to be a bit of a political football.  The controversy over the non market units...people don't drill down. They don't separate it out. It's pretty special product on the water."

Rennie fought to bring the Olympics to Vancouver.  He believed in the benefits then and believes in them today.

"We got a six billion dollar ad campaign for BC and Canada by having the Games," he said. "We had just come out of an economic downturn.  How do you get a country to feel good about itself after that?"

"After day four, when we decided the world approved of us, we were galvanized as a country.  Whether it was red mitts or the hockey game, for no agenda and no return, we stood up and were very patriotic.

"Chrétien not taking us into Iraq and the Olympics---they have both been so important for Canadian identity. We got so much benefit."

The Vancouver Sun's Miro Cernetig arrived for HIS interview with Rennie, before mine had ended.  Rennie invited him to join us and I listened as Cernetig amiably told Rennie about the state of the media and changes in digital technologies.  He compared VO with The Tyee, talked about some of the articles both have done, named their differences and potential, and was generous with his praise of both sites. Rennie listened with interest. His ability to listen was part of his charm and also part of his salesmanship.

I asked Rennie what artists were on his radar today.  He named Pablo Bronstein and Lesley Vance,  "a recent acquisition currently on loan to the Contemporary Art Gallery in Vancouver."

Then, to  a question I almost overlooked, perhaps the most important question of all.  "Advice for young artists?"

"Do works for yourself, not your audience," one of North America's most prominent collectors of modern art replied.

Author's footnote: I rarely let an interview sit four months before crafting it into an article, but I wanted to take time to let my thoughts about Rennie form at a distance from the satisfaction and enjoyment I genuinely took in hanging out with him.  It was as refreshing as reading a  New Yorker, after a long stretch of reading only The Vancouver Sun. 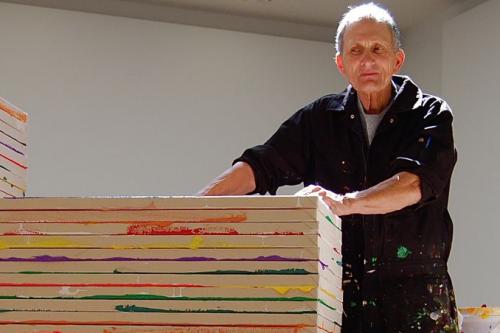