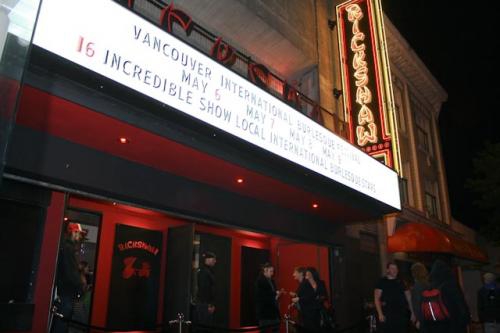 I went to the VIBF on Thursday and Friday. The shows were inspiring, the audience was wildly enthusiastic, and the theatre was beautiful. Every night was full of great performances, far too many to cover in one article

A few of the organizers and performers shared their stories with me on the VIBF and the exciting growth of burlesque in Vancouver.

Michael “Fitz” Fitzpatrick spoke with me about the Festival and his involvement as Vice-President of the Vancouver Burlesque Festival Society a non-profit that puts on the VIBF.

Burgandy Brixx, on the Board of Directors for the VIBF society, spoke with me about exciting growth of burlesque from New York to Vancouver. Originally from New York City, she moved here two years to produce Vancouver’s longest running weekly burlesque show called Kitty Nights West at the Biltmore Cabaret. Burgandy works full time managing and performing in Kitty Nights, while also running a dance studio featuring burlesque lessons. She says that Vancouver’s burlesque is rapidly growing and gaining international recognition. On Sunday night she will star in “Kitty Nights Burlesque: East Village meets East Van!” that will be a “food piece that involves cherries”, which exemplifies her style of classic burlesque infused with comedy.

BonBon Bombay, a burlesque performer, dancer, and choreographer, spoke to me about her show on Sunday and her work with Rosanna Wijenberg, aka Rosie Delight on “Rosie Delight… needs a New Brain!”. Rosie Delight was recently diagnosed with a very rare, progressive and disabling neurological movement disorder, which affects her ability to control her movements. BonBon told me that she worked closely with Rosie to include movements that trigger her disorder. During our interview I was told that director Rick Podd and a film crew are working on a full length about Rosie, her life, and her disorder. In addition to discussing Rosie Delight’s moving piece, BonBon mentioned that she will be performing on Sunday at the midnight showcase called “The Barber shop”