Over three-hundred art lover and social media types packed the “Twitter/Art+Social Media” show on Thursday at the Diane Farris Gallery to view 80-100  pieces by 43 artists from Canada, USA, Europe, and Asia. 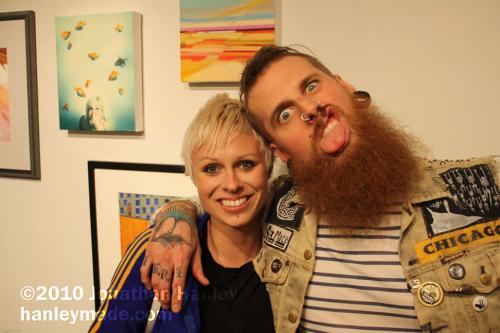 The Twitter/Art+Social Media show on Thursday at the Diane Farris Gallery was an event waiting to happen. People in Vancouver were ready for a show that looked at how artists are creating, sharing, and promoting their work in this ‘social media’ age. Over 300 art-lover and social media types packed the gallery to view 80-100 art pieces by 43 artists from Canada, USA, Europe, and Asia.

The exhibition was developed from an original idea by Mia Johnson, who has been the webmaster of the Diane Farris Gallery website since 2004.  She created the Twitter exhibit blog, designed the submission forms to enable artists to apply online and has been technical advisor to the exhibition. Her work can be found at kitsmedia.ca.

I spoke with Lili Vieira de Carvalho and Stacey White about the purpose and background of the show. Both de Carvalho and White described how the artist’s life changes from art student to professional artist. In art school, the artist works in a shared space and gets feedback and support from other artists. Once the artists leave art school, they can become isolated. Lili sees social media as being the support group and way of finding your tribe. Artists can come together with social media and share, network, and organize shows. It’s becoming the new platform for work.

For the first time in Diane Farris gallery’s history, the show was an open call for artists. Over 200 submissions were received with 80-100 pieces in the show. The artworks were selected by a multidisciplinary committee from submissions to the gallery’s open call during February. The selection committee was composed of 43 artists: Lili Vieira de Carvalho, curator of the show and Associate Director at Diane Farris Gallery; Kris Krug, photographer and web strategist; Dr. Maria Lantin, Director of the Intersections Digital Studios (IDS) research centre at the Emily Carr University of Art + Design; and Hank Bull, the Executive Director at Centre A.

There were size constraints such as the work had to be no bigger than 24x24 inches and selling for no more than a thousand dollars. The process to choose artists for the show were based on a 150 word artist’s statement and their work. The traditional importance of the artist’s bio or previous art experience wasn’t part of the selection criteria.

Lili said that the gallery was trying something new, instead of following their usual template for selection process. The open call approach meant less control over choices by the gallery but also created opportunities for unsigned or unknown artists to show in an established Vancouver gallery.

The Diane Farris gallery hopes that other art venues pick up on the idea. The gallery will wait until after the “Twitter/Art+Social Media”  show before they start thinking about what they’ll do next or if they’ll have another similar show.


I had a chance to interview a few of the artists presenting at the gallery on opening night.

Debra Stringfellow found a series of police sketches of criminals which she found online. The sketches were placed together in a checkerboard pattern. According to Debra, social networks such as Facebook and Twitter as “playgrounds for criminals”. She elaborated to say that people’s identity’s were being stolen and people were being stalked online without the victim’s even knowing the criminal beyond the computer screen.  She told me the piece was created to put a face to the criminals on both a figurative and literal level.