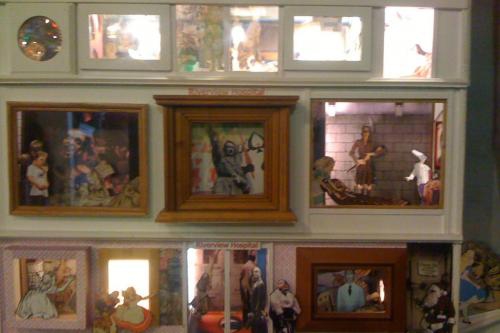 Seedy hotels, strip clubs, hemp cafes, cops, and robbers line the walls of the Fall Gallery at 644 Seymour Street in Vancouver. On Friday, Feb 5, local artist Mad Dog welcomed fans to his first show in seven years – and, as parties go, everyone had a great time – loving (and buying) the art, drinking beer, and talking with old friends and new strangers.

Mad Dog said it took a year and a half to put together this collection of replica buildings inspired by the years he lived in Strathcona. He said he finally decided to leave the neighbourhood because he was sick of getting ripped off. He is one of many artists leaving as pockets of the neighbourhood become increasingly gentrified.

Mad Dog’s “golden castle” is a replica of a Strathcona home that in today’s market sells for a million dollars and is renovated and fortified with bars that keep out robbers on drugs.

Each piece of the 3D animated city is made of wood, glass, collage, and found objects. I asked Mad Dog about the Robert Crumb comic that lines the interior of one building. He said he’d had the “No escape” comic panels (that show a naked hippie guy stuck in a box, contorting hopelessly) on his wall as a kid. I told him I liked the rotating pedestal of Marilyn Monroe and other glamorous strippers.

“Riverview” evokes thoughts of people with mental illness taken by cab from Riverview (an old school mental institution) and dropped on the corner of Main and Hastings. Mental health and addictions – their own or those of other people – are big issues for the people in the neighbourhood.

The Big Can of City Dog Food show runs at The Fall til Feb. 28. Do check it out.