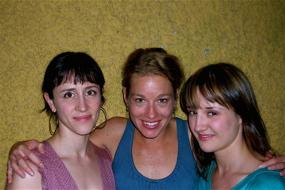 Ever wonder about the mating rituals between a playwright and a swordsman? Do opposites attract? Well, if opposites aren’t naturally attracted The Tomorrow Collective makes it so, in their creative performance of Brief Encounters.

Flamenco dancer Bonnie Stewart and environmental activist Stephanie Goodwin are among the twelve performers in Brief Encounters 6, a unique multi-media showcase designed to fuse creative genres and push artistic boundaries. Created by the Tomorrow Collective over two years ago, this trio of local contemporary dance artists (Mara Branscombe, Katy Harris-McLeod and Jennifer McLeish-Lewis) fashions a production of unusual pairings of artists from diverse backgrounds with only two weeks to collaboratively co-create a performance piece. The unusual eclecticism of what happens when two worlds collide puts Brief Encounters into the verve of Vancouver’s avant-garde art scene.

Committed to evolving and exposing contemporary dance, The Tomorrow Collective has produced 72 artists over the last 6 installments of Brief Encounters and continues to showcase fused talents through mixed media inviting its audience to think about art in a new way and to explore Vancouver’s cultural life. Art is everywhere, for everyone.

Writer Teresa Goff and street dancer Stu Iguidez came together performing a dramatic piece of spoken word and urban dance. While Goff, behind the scenes, narrated a heartfelt story of a casual street encounter, Iguidez mimed and danced the story of two girls witnessing a man in a wheelchair take a fall illuminating how some of us choose to help the hopeless and others are just hopeless themselves.

More than a collaboration of two artists but rather a cross-cultural fusion, the final duo paired contemporary dancer, Chengxin Wei and tabla drummer Tarun Nayar, for a melodic, intermingling of East Indian rhythms with classical Chinese sword dancing and ballet. A language in and of itself, tabla beats entranced Wei into a sophisticated and graceful dance. Flirting with Eastern and Western dance styles and music, the duo brought their performance to its zenith with Wei flying into a creative whirl with a traditional Chinese sword to the electronic beats of a laptop computer.

The four other "encounters" were a combination of comedy, dramatic ceremonial performance and video.

What started out as a passion for bringing contemporary dance to the public eye and to unite seemingly disparate art forms together, The Tomorrow Collective recently received funding from the Canada Council for the Arts which will take Brief Encounters into their seventh production this September.

While most of the invitees have never met or worked together before this event often continues beyond a mere “brief encounter.” As a result of the success and splendor of this two-day affair, many of the artists’ collaborations evolve into future performances….a true collective of tomorrow.