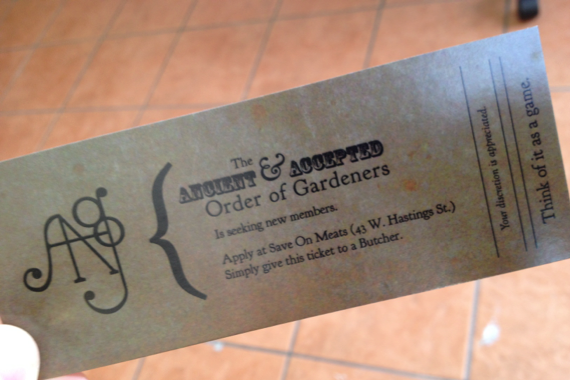 Vancouver's architecture tells us the story of our city, the myth, meaning(s) and power of place. It’s a story that is right here in front of us yet too often unseen and unexplored. So how do we open our eyes and ears to it, how can we explore it better? It’s always fascinating to read about it, and indeed local historians like James Johnstone, House Historian, have written delightful and fascinating pieces about the most cherished and inquisitive buildings throughout our city, he even provides tours. The Vancouver Heritage Foundation and the City itself also do great work to draw attention to our heritage assets, but what other ways can we learn about who we, as Vancouver, are?

Right now in the Victory-Square area of the City, the western portion of Vancouver’s Downtown Eastside, the Hastings Crossing Business Improvement Association has collaborated with several local businesses to do just that. Find another way to open our eyes and ears to the incredible story we see, inked in stone, steel and glass. And that way is through game-play.

Research has shown that one of the most impactful methods of learning is doing, so in order to learn heritage, in order to learn history, the association though what better way than to immerse people in history through an interactive game experience?

The game, designed in collaboration with local company Ninja Training and members of the BIA, leads individuals through businesses and historic places combining real and pseudo-history to create the narrative of a mystery. The mystery of how Vancouver came to be the way it is today. And sometimes the truth is stranger than the fiction. Did you know that Harry Houdini once suspended himself from the Sun Tower on Pender and Beatty, once the tallest building in the British Empire? And another daredevil by the name of Harry Gardiner the "Human Fly" scaled the tower and climbed through one of the top floor windows?

The beautiful 1912 building has recently had its interior refinished and has become one of the premier heritage office spaces in the city. Somewhere inside is a long forgotten piece of Vancouver’s hidden history waiting to be discovered, and a trail of clues throughout the surrounding area, beginning at Save On Meats, lead to it.

Sadly, this young city has had to part ways with a number of iconic heritage buildings, most recently the Pantages being counted among them. For years these properties lay dormant and literally rotting. The Save On Meats sign and business itself are pieces of Vancouver’s history that may also have been lost if not for the determined entrepreneurial gumption of Mark Brand. The Flying Pig may have gotten a new lease on life, but other storied buildings and iconic signs still stand precariously close to extinction in the area, if not simply under appreciated and uncelebrated.

Remember the Smiling Buddha? But as investment has returned to the DTES many heritage buildings are also being restored, preserved and filled with businesses; the Sun Tower being perhaps the most noteworthy of these, particularly with the Vancouver’s Sun’s 100th anniversary this year.

To become immersed in the hidden history of the Downtown Eastside go find one of these tickets at Bean Around the World on Cambie and Hastings, Save On Meats, Finch’s Tea House or just by luck somewhere else in the neighbourhood. An adventure in time and place awaits you.