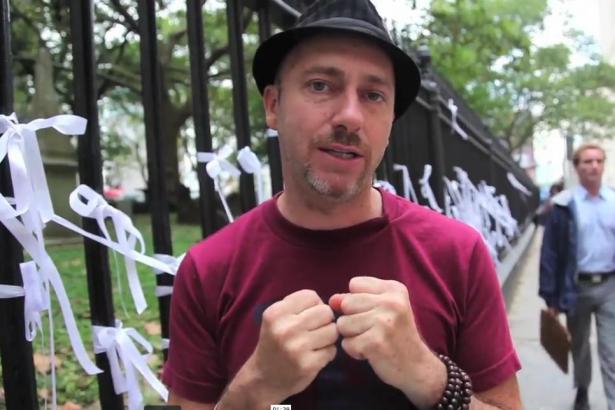 When documentary filmmaker Velcrow Ripper went down to Zuccotti Park on September 17th, he didn’t know what to expect.

As it turned out, that date marked the beginning of an unprecedented global movement – Occupy Wall Street – which would soon become the foundation for his newest film project, Occupy Love.

“We really didn’t know that first week what was going to happen, or if it was even going to last,” said Ripper.

“But then, it just started to build momentum and turn into this vast snowball. And suddenly, it’s one of the most extraordinary movements I’ve seen in history.”

Ripper, a 48-year-old director and activist from Gibsons, BC, has seen his share of demonstrations over the years. His previous two films – Scared Sacred (2004) and Fierce Light (2009) – are part of an ongoing trilogy about spirituality and social change that has taken him on a life-changing journey around the world.

Before Occupy Wall Street began, Ripper was working on the third installment in the series, originally to be called Evolve Love.

“Fierce Light kind of predicts what happened with Occupy Wall Street and the Arab Spring, and the European Summer,” Ripper explained.

“And then, when Occupy happened, it was kind of like that movement of movements that didn’t even know that it existed, discovering itself. Especially when it went global,” he said.

After spending time in New York documenting the Wall Street protests as they unfolded, Ripper took off to capture what was happening within other movements in Spain, Egypt and the UK. Despite the obvious differences in each country’s political climate, he says the independent Occupations all share a common bond.

“I really have seen consistently that the bedrock of this whole movement really is love,” said Ripper, explaining the motivation behind his new film’s title.

“It’s not the private love of romance. It’s a public love,” he said.

“I really feel that this compassion and love – a sense of interconnectedness – is really recognized around the world, everywhere I go in this movement.”

While Occupy camps in different parts of the world are at varying stages, Ripper says it’s important to keep in mind that each individual faction is part of something truly global. Mentioning the struggles Occupy Vancouver has faced over the last two months, his message to local protesters is one of strength and hope.

“Don’t believe any media that tells you the movement’s going to end or something. No way. It’s too big. The cat’s out of the bag,” he said.

The next part of the evolutionary process is something Ripper describes as “Occupy 2.0”, which he says is happening all over the world as protesters start focusing less on practical matters like encampments and more on addressing real, local needs. Like Vancouver, many cities have struggled with issues around housing – and now in places like Spain and New York, Ripper says Occupiers have taken over vacant buildings to help house evicted families.

The filmmaker and the activist

While some journalists and filmmakers strive to keep a distance between themselves and their subject matter, Ripper has no qualms about expressing his personal involvement in the movement he’s trying to document.

“It’s definitely very personal for me,” he explained.

“I’ve been a media activist my whole life, and in many ways the Occupy movement is kind of what I’ve been waiting for my whole life.”

And although the film delves into the various movements related to Occupy Wall Street, the director says that’s not all it’s about.

Almost at the end of the shooting, Ripper says he’s now focused on crowd-funding the film through an online IndieGoGo campaign to make money for the rest of production. He realizes that there’s no way to capture the entire movement or follow it indefinitely, but that’s part of the beauty of it.

“As I like to say, this movement is a process, not a product.”

As for his own final product, Ripper says he intends for the film to be released in either the summer or fall of 2012. Where the Occupy movement will be by then, nobody knows. But according to Velcrow Ripper, there’s still a lot in store.

“As long as we come back to that sense of compassion and this belief that a world that works for all life is possible. Evolutions take time, but if our process is really founded on embodied love, then we can’t lose. We’ve already won.”

Velcrow Ripper and Occupy Love co-director Ian MacKenzie will be speaking in Vancouver on Tuesday, December 20th at the W2 Media Café. The event begins at 6:30 p.m. For more information, click here.