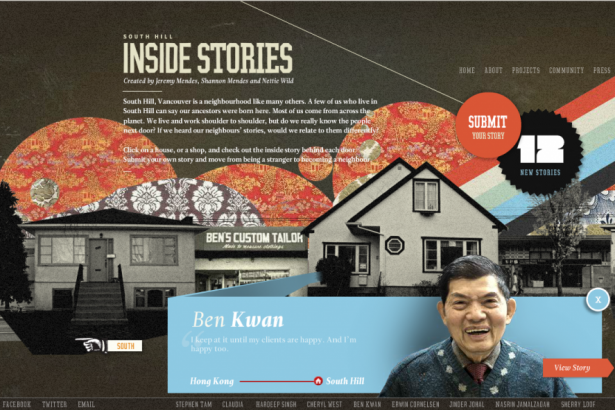 Screenshot of Inside Stories

Local residents of South Hill Vancouver are getting to know each others’Inside Stories on a new, interactive website sponsored by the Government of Canada and Province of BC.

The project started when community organizer Susan Faehndrich-Findlay applied for funding with the South Vancouver Neighbourhood House to produce a short documentary commemorating the area’s centenary in 2010. “We wanted to follow three immigrant families who had arrived in South Hill in different decades, uncovering what helped them to feel at home here and what made it harder,” recalls Faehndrich-Findlay.

“I’ve lived in the neighbourhood for a long time and I understand that the journey to the place where a new country feels like home, can be long and complicated.  I’ve had two periods in my life where I’ve been the immigrant in another country so I can relate,” reveals Faehndrich-Findlay.

But when the funding came through for the project, it was through the public education stream. “My first thought when I heard “public education” was all the well-meaning pamphlets that come to the door or line the shelves of doctor’s offices and libraries—straightforward and boring.”

“Art, on the other hand, intrigues us by capturing our imagination and drawing us in. I think that neighbours come together in a natural and organic way around art,” she says.

Wild is one of Canada’s leading documentary filmmakers and best known for her features, including Fix: The Story of an Addicted City (2002). Twice, she has won the Genie Award for Best Feature Documentary in Canada; in 2010, Wild also received the BC Film Critics Circle Award for her contribution to the industry.

“When I initially emailed Nettie, I thought that our project was probably too small for her so I was delighted when she was interested. And Nettie wanted to experiment with interactive digital storytelling which she thought our project was better suited to than a traditional documentary,” remembers Faehndrich-Findlay. 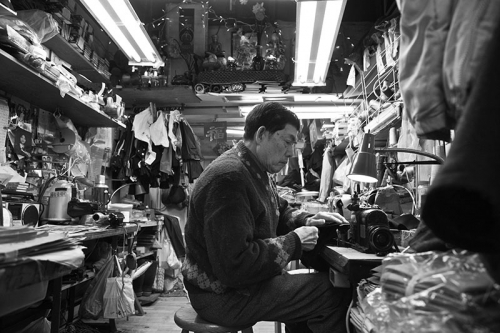 Ben Kwan, South Hill’s local tailor, shares how he escaped famine and revolution in China to settle on Fraser Street in Inside Stories

Faehndrich-Findlay and Wild met with local residents, chatting over tea about their personal histories. Many later agreed to record their narratives for the project. “With a practiced eye, Nettie then crafted the essence of what was said into a powerful, short statement,” says Faehndrich-Findlay. “Next, photographer Shannon Mendes captured what we needed visually to make the stories work. The third artist on the project–Jeremy Mendes—figured out how to situate the stories within an interactive environment that would draw people in.”

“Art raises questions and gets people talking. As people talk and interact, they build social capital—taking us back to Jane Jacobs and her vision of a neighbourhood created out of a web of human relationships that are built over time,” explains Faehndrich-Findlay.

Digital art has its analog in offline exhibits and events like the local paste-up party Faehndrich-Findlay helped organize to celebrate Inside Stories, modeling it after the work of street artist JR who won the TED Prize for 2011.

“I felt inspired by JR’s work,” Faehndrich-Findlay says, “because he has such a passion to marry art and social change. It felt natural to borrow JR’s idea of using the public realm as a large outdoor gallery.”

Six oversized 12’x9’ photos of Inside Stories storytellers were pasted up throughout the neighbourhood by the community in July as part of Vancouver’s 125th Anniversary celebrations.

The community will come together once again on November 3, 2011, in the Alice MacKay room at the Vancouver Public Library. A special screening ofInside Stories will be followed by an open discussion moderated by Nettie Wild to consider whether art can trigger social change. Admission is free but seating is limited so you’re encouraged to register early online.

In Part I, artist and filmmaker Nettie Wild talks about experimenting with online storytelling.