All eyes on today's report on Stanley Cup riots

Lessons expected to be learned this time around -- and police communications may be one of them. 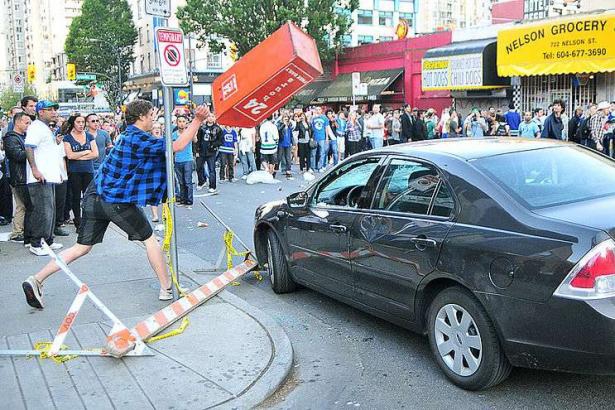 VANCOUVER -- A report into Vancouver's Stanley Cup riot is set for release today, examining what factors led to the chaos that followed the Canucks loss to the Boston Bruins and how to prevent it from happening again.

John Furlong, the former head of Vancouver's Olympic committee, and Douglas Keefe, a former Nova Scotia deputy attorney general, were appointed to oversee an independent review looking back on the June 15 riot and forward to the next time the city hosts a large event.

The province, city and Vancouver Police Department asked the men to look at what was learned from the past 1994 riot in Vancouver, the policies the city and police had with regard to large public gatherings, the availability of liquor that night, and the events leading up to the riot.

Even before the final buzzer, rioters had overturned a vehicle set it alight inside a massive outdoor viewing site, where thousands had gathered the watch the game on giant screens.

Hours later, the riot spread over several blocks, where windows were smashed and more than 60 stores were looted at a cost of several million dollars.

Kash Heed, a Liberal in the provincial legislature who made a submission to the review, hopes the report will set out new policies for the city and its police force.

"So that we're able to prevent an incident of this magnitude taking place in Vancouver,'' said Heed, a former police chief in neighbouring West Vancouver.

Currently, the greater Vancouver area is serviced by a mix of several independent forces and the RCMP.

Heed, a former solicitor general, said a unified force may have prevented the riot and could have helped in other investigations, such as the investigation into serial killer Robert Pickton.

"There's the possibility that the structure of policing in British Columbia is more of a hindrance than helpful in these particular circumstances,'' said Heed.

A report into another riot in Vancouver in 1994, which followed a similar Stanley Cup loss, noted there were concerns about whether large crowds should be invited to the downtown core, though the report did not make any recommendations on that issue.

Vancouver Mayor Gregor Robertson admitted he only read the report after the June riot.

Gordon thinks the new report will be read.

"There are so many eyes on this now that it would be foolish in the extreme, in a decision-making position, to not have a look at it and determine whether or not any recommendation need to be followed thorough on.''

Gordon said he suspects a breakdown in communications between police forces probably played a role in allowing rioters to run amok for hours.

He also expects to read about the shortcomings in how the city prepared the celebration site.

"A good example of that would be those notorious mobile blue fences that ended up being projectiles. I don't know which clown suggested those be erected.''

Police are investigating the possible involvement of more than 1,000 people in the riot, but no one has yet been charged with rioting.

A website launched by the police department on Tuesday asking for help identifying possible riot suspects had almost 90,000 hits in the first 24 hours and police were sifting through 140 tips.

After riots, Facebook commentators weigh in on Brand Vancouver