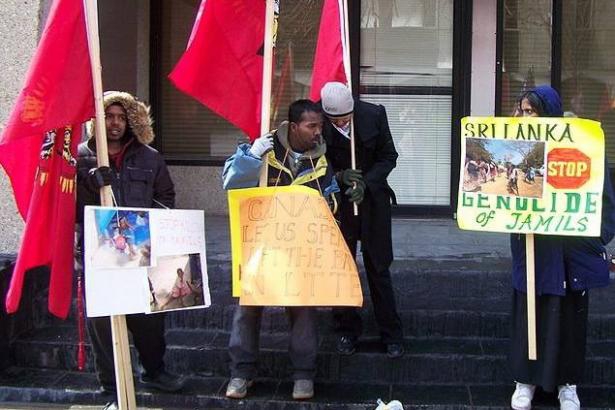 Two years after the Ocean Sea arrived off Port Renfrew, crammed with Tamil migrants claiming refugee status in Canada, four men charged with human smuggling in connection with the ship have been granted bail in Toronto, where they now live and work.

VANCOUVER -- Four men charged with human smuggling in connection with a freighter that ferried dozens of Tamil migrants to Canada's West Coast will return to the Toronto area to await trial, after they were granted bail Friday.

A B.C. Supreme Court judge ruled that the men, all in their 30s, can be released under conditions with cash deposits.

RCMP arrested the group in Toronto last month, almost two years after the Ocean Lady arrived near Port Renfrew, off Vancouver Island. The foursome, along with 72 other migrants, were held in detention for up to three months before being freed.

After that most moved to the Toronto area, where the four accused currently live and work.

Sporting red jail-issue clothing, the men listened to the decision Friday delivered by a translator over headphones. Their case is proceeding through direct indictment and their next court appearance scheduled for Sept. 14.

Evidence presented at a bail hearing last Thursday and the judge's reasons for granting bail are under a routine publication ban.

Conditions set by the judge include a requirement the men continue to live at their current addresses in Toronto, they abide by conditions set by the Immigration and Refugee Board and they not possess or apply for a passport, visa or other travel documents.

They are prohibited from possessing any weapons, except in the case of one migrant who may use items like box cutters in his job at a warehouse.

The men must not have contact with each other or any of the other migrants who sailed aboard the Ocean Lady, but another exception was made for one man whose co-worker made the same journey.

Since their arrival, the federal government has touted the case of the Ocean Lady and a second ship of nearly 500 ethnic Tamils that sailed into B.C. waters last summer to push for more aggressive laws on human smuggling. The MV Sun Sea, which also carried women and children, arrived in August last year.

Ottawa alleges many of the migrants are linked to the Liberation Tigers of Tamil Eelam, a banned terrorist organization known as the Tamil Tigers.

A protracted civil war that divided Sri Lanka for decades ended two years ago with the Tigers' defeat. Since then, ships such as the Ocean Lady and the Sun Sea have made the arduous journey across the oceans to places like Canada, laden with Tamils who say they are fleeing persecution in their homeland.

While everyone aboard the first ship was released, eight men from last summer's arrivals remain in detention. Six passengers have been deported because the Immigration and Refugee Board found they did have links to the terrorist group.

No such allegation have been substantiated for the first group, including for the four accused.