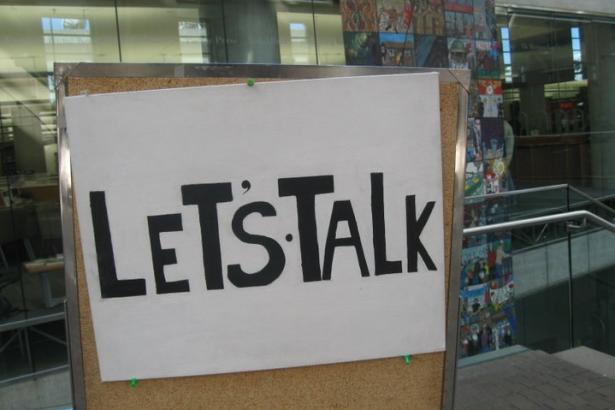 In response to the 2011 Vancouver Stanley Cup Riot, youth from all across Metro Vancouver gathered at the downtown Central Branch of the Vancouver Public Library to share their opinions with each other and public officials.

Following the Boston Bruins' win over the Vancouver Canucks in the final game of the Stanley Cup Finals, people began fighting, vandalizing public property, and setting vehicles on fire.  "[People] were laughing while they did it," said Vancouver city councillor Heather Deal. "They were taking pictures and smiling," she said addressing the forum.

"I was in the West End, and I was devastated because this is my city," said Vancouverite Linda Diano, who is also organizing a riot-forum for people of all ages.

VANCOUVER RIOT: Let's Talk About It aims to "take collective action for the city," said Leah Bae, organizer of the forum and president of the Vancouver District Student Council. "We always want to help our city out, and that's where students and youth come in," Bae said.

Participants of the forum took part in discussions centering around four topics: personal experience, the face of Vancouver, mob mentality, and post-riot — before brainstorming about ideas to help our city and prevent further similar behaviour.

Ideas included restorative justice — having the rioters take responsibility for their actions and repair the harm they've done, supporting businesses who were harmed in the riot, educating people about social responsibility in school and documentaries, and increasing volunteering to give youth a chance to engage themselves with the community.

Sir Winston Churchill Secondary School student Jeffrey Hu's idea, however, particularly stood out to Bae.  He suggested taking the apology wall and spreading it all across Granville Street as a constant reminder to pedestrians about the riot: what we saw, what we've learned, and what we can take away from it.

"[This forum] is what we are all hoping for," said Vancouver School Board chairperson Patti Bacchus.  "We need youth engagement."  It's the key to ending riot behaviour.

It just goes to show that youth care about the city, said Bae.  We have a plan.

The Vancouver District Student Council will be compiling a report on the event for youth to learn from it. Youth will also be in contact with one another so they can start their own projects.

If anybody would like to obtain a copy of the report, please contact the Vancouver District Student Council at [email protected].

As well, if anyone would like to participate in a similar forum that isn't restricted to youth, please look at Diano's Facebook page for her forum here: Facilitated Open Forum.