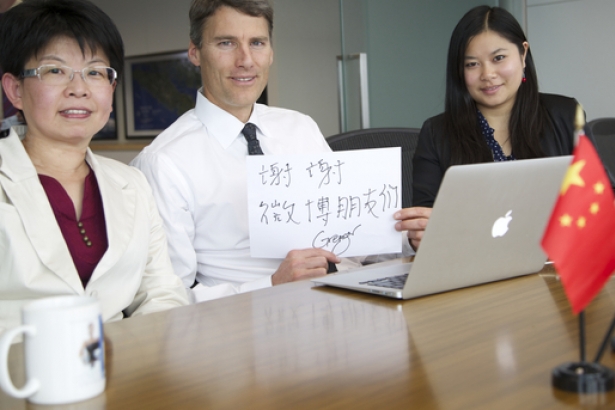 Vancouver Mayor Gregor Robertson hosted a live chat yesterday on China’s most popular social media platform, a twitter-like service called Sina Weibo, in in Beijing. The hour-long Q&A session covered topics ranging from investment opportunities to travel to Vancouver, according to a press release from the City of Vancouver.

The purpose of the chat was to engage Chinese-speaking followers in conversation around the Vancouver-China Business Mission 2013, and many questions were posed related to Vancouver’s business and cultural landscape. The Mayor highlighted Canada’s many different investment and immigration opportunities for Chinese citizens, including the new “Start-Up Visa,” which helps entrepreneurs connect with experienced individuals in the private sector.

Mayor Robertson, a frequent user of Twitter, first became active on Sina Weibo as a new way of reaching out to Vancouver’s Chinese-speaking citizens. The live chat, which was hosted on November 5, from11am -12pm Beijing time, was also popular with the Mayor’s Vancouver-based fans, who joined in the local time zone on November 4 from 7pm - 8pm.

Mayor Robertson has been updating his Sina Weibo account daily with news from the trade mission, posting details on the companies accompanying him in Beijing, Shanghai, Guangzhou and HK from Nov. 4 - Nov. 12 and engaging with other questions from his fans, which currently number nearly 78,000. He is the first Canadian politician to host a Sina Weibo live chat.