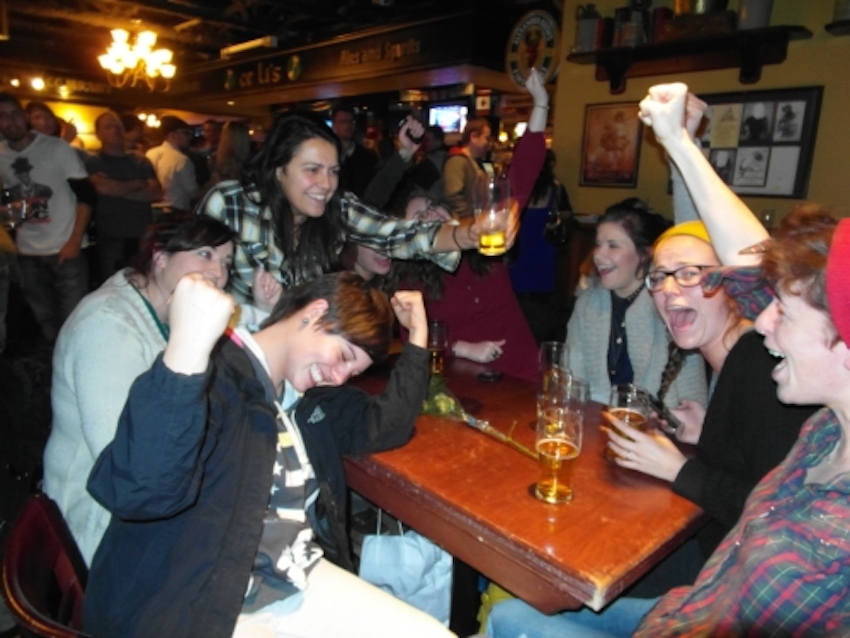 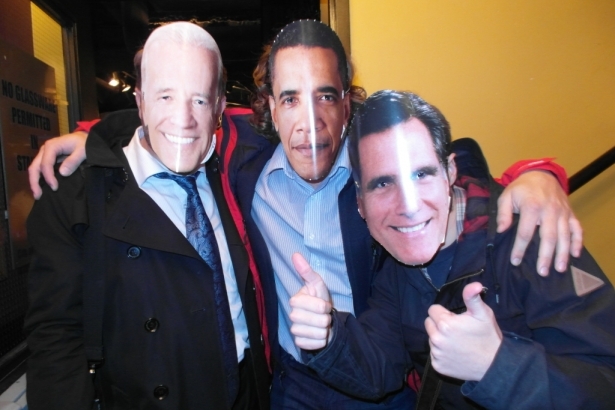 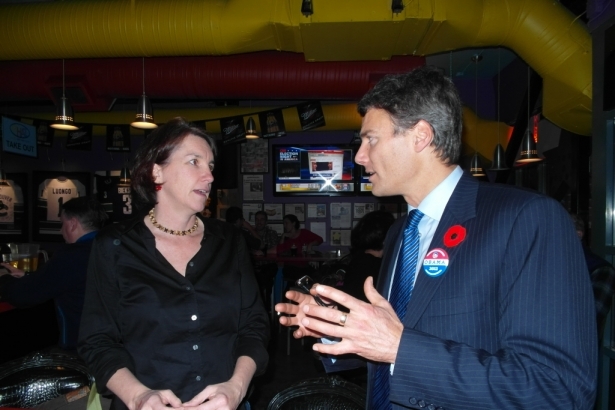 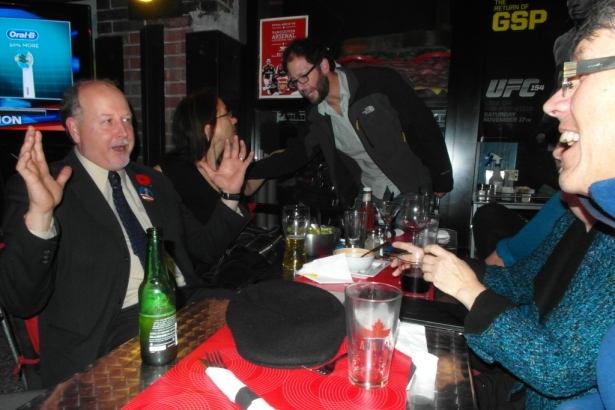 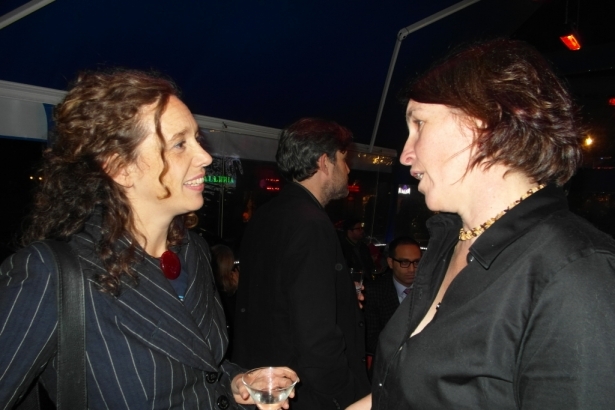 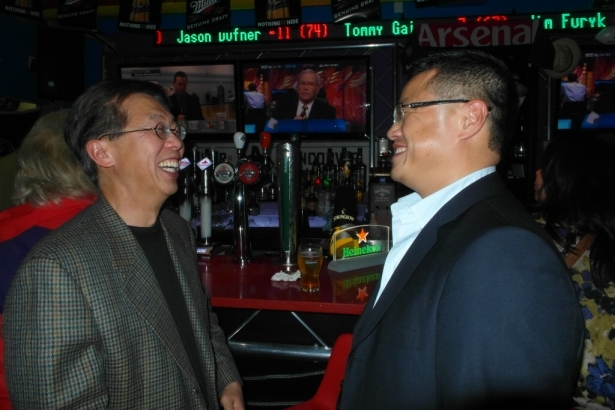 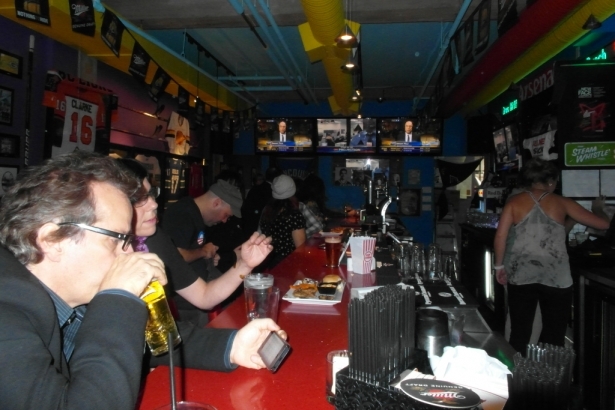 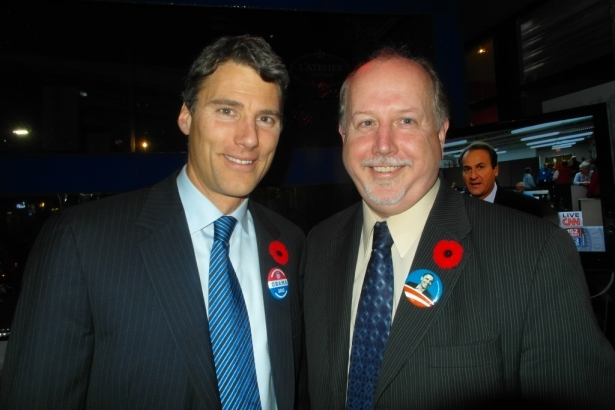 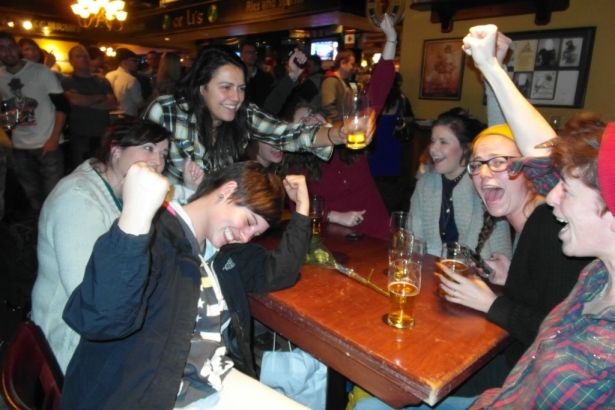 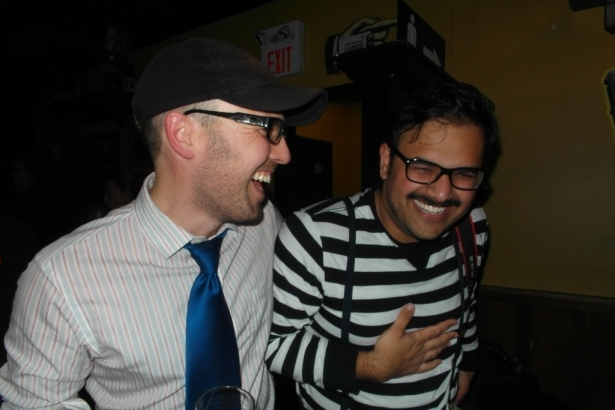 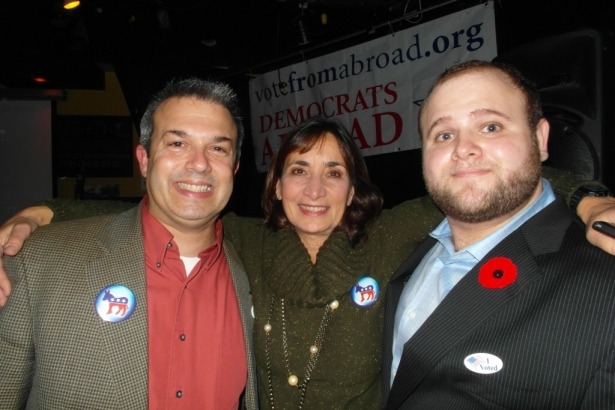 "The exit poll numbers are now just coming in...."

The incessant sound of CNN commentary mixed with the smell of fries, chicken wings, and beer at PHAT Deli in Yaletown, where Vision Vancouver hosted a U.S. presidential election-watching party on Tuesday evening.

By 5:30 p.m. over a hundred men, women, and some of their children sat, stood, or nervously paced the dimly lit pub, excitedly discussing the latest exit poll numbers from Indiana, Georgia, Kentucky, South Carolina, and the southern states.

Vancouver Mayor's Office Chief of Staff Michael Magee sat under the tarp on the pub's front patio, where two giant flat screen televisions on each side streamed CNN's election coverage.

"I'm nervous, I'm somewhat terrified," he said, when asked how he felt. "It's a nail biter right now but I'm confident that Obama's gonna pull it off."

Sitting at the table with Magee was environmentalist and writer Tzeporah Berman.

"Notice how all these commercial breaks are ads by big oil companies," she commented.

When asked to elaborate, Berman said this is reflective of the influence of big oil and coal companies on American politics.

"The fact is, that the fossil fuel industry we know has an undue influence on the political process and that's why we haven't moved quicker to address climate change," she said.

Who is she cheering for?

"I think there's no question that an Obama win means a win for clean energy. It also means that we still have a chance in ensuring that we have a U.S. government that doesn't approve Keystone," she said.

Meanwhile, inside the pub Vancouver's mayor Gregor Robertson was deep in conversation with Karen Campbell, a lawyer from Ecojustice.

When asked what he hoped to happen tonight, Robertson didn't hesitate.

"I'm hoping Obama gets a second term. He's earned it in a tough first four years and I think he's capable of doing lots more good work in the second term," he said.

Arriving later on at the party was Councillor Andrea Reimer, who began watching her Twitter feed at 1:30 am. Having campaigned for Obama in the 2008 election, Reimer said she and her husband are keen watchers of American politics.

"It has so much impact on our policy here in Canada, particularly on things like climate change and environmental policy, but also social programs and how they're going to deal with those moving forward watching their health care debate has been really challenging," she said.

Sitting at the bar was Councillor Raymond Louie, who said he started watching at 6 pm.

A few feet away Councillor Tony Tang sat, eating a platter of chicken wings and watching the coverage.

"I was excited because I had five events I had to go to," Tang said about his day so far. "But I'm excited to sit down."

Where was Tang headed to next? To the Democrats Abroad party downtown.