Down in the underground,
A land serene...
- David Bowie

I know I speak for plenty of Vancouverites in saying we're thrilled about Vancouver's growing bike-lane network and the upcoming bikeshare program. However, there's even more Vancouver could do to foster a bicycle-commuter culture. I'd like to point out a problem as well as propose a solution. A futuristic, robotic solution.

When we ride into the city, cyclists face two fearsome foes: rain and bike thieves. Sure, we don our brightly-coloured slickers when the heavens open, but, should we find an available bike-rack spot downtown, our trusty steeds must spend the day getting pelted by the relentless and merciless clouds above.

This presumes that our bikes even survive the day. All over Vancouver, and particularly downtown and at UBC, bicycle theft is rampant. Vancouver has over 1,500 reported bicycle thefts a year.

Check out the video at the top of this page. What you'll see is an automated parking structure for bicycles in Tokyo. Commuters and shoppers can secure their bicycles beneath the street, where they'll be safe from both the elements and the thieves' boltcutters.

The system was designed by a Japanese civil engineering firm called Giken to relieve the pressure of overcrowded bike racks and illegal bike parking in the world's largest city. It's like a high-tech magic trick, described by Giken as “Culture Aboveground, Function Underground”. That's what what we want, right? A functional, beautiful city, where getting around is easy and safe.

Here's a video of the Giken ECO Cycle bike storage unit in real life. The system demonstrated is in Shinagawa, Tokyo; home of Acura, Japan Airlines, and Bandai-Namco. Please ignore what Canadian national treasures the Barenaked Ladies call "the boom anime babes", though.

The bicycle then descends into an 8.5m x 11.6m robotic sorting silo, such as that used for high-end sports cars in "Mission: Impossible – Ghost Protocol". (Don't tell me you haven't seen it.) 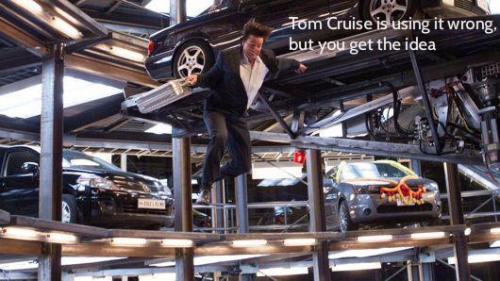 The bike then joins 203 of its friends in a safe, dry haven. Tiny surface-level footprint, massive storage capacity underground.

The cyclist controls the entire process with RFID tags: one on the bike, and one in her pocket. Aside from standalone access cards, how about connecting the service to our brand-new Compass card? You can ride into the city for work or to watch the game. Canucks, Whitecaps, or Lions, take your pick. Park your bike; then, if you're too tired or if it's too rainy, just pop your bike on the front of a bus and get back home. Smooth like butter.

The Vancouver public bikeshare program alleviates some of the rider's risk from wear-and-tear and theft, in that the bike is not the rider's problem once it's docked. However, the program is currently limited to the metro core; expansion into the further reaches of the city just seems unlikely in the medium-term. Lots of us live outside the Vancouver metro core, pushed out by the cost of living. Pushing a relatively-heavy share-bike for 20km is not realistic. Rather than pick our poison (higher rents and property prices or the cost of maintaining a car), we would like to cycle into the city.

A monthly account for one of these bike-parking silos costs the average Tokyo commuter ¥1800, which is about $19. By contrast, how much does a replacement seat cost? A new chain or rear cassette? How much does bike theft cost the city in terms of policing?

Let's give one of these underground pike parking devices a try. I'll be in Tokyo for the International Robot Exhibition in November. Giken's Tokyo  head office will be nearby. If you want me to drop off a business card, just let me know.

Vancouver's current infrastructure feels a few steps behind the city's actual growth and evolution. Let's get a few steps ahead.

How to get more people cycling in Vancouver? Ask Copenhagen.