Kim Cathers was an interesting interview, because I had arrived at the opening hoping to speak to her, but was biased having seen her on Project Runway. She was known for being a bitch on the show. However, I was pleasantly surprised because in person she was a very friendly, open and honest person. She explains that after being on Project Runway, she had to take some time off to recollect herself because it had been an overwhelming experience. To decide what she wanted to do next, she ended up going to Gabriola Island on the west coast and stayed there for nine months to reconnect with what was the point of this life.  She felt that with 80 years to live her life, she wanted to take advantage of doing something she loves to do. Then she decided to come back to Vancouver to pursue fashion because she felt like this was something that kept calling her back. She had always recycled things and reworked things. Having breifly studied architecture, she quickyly learned that she preferred to work with fabric instead of wires and wood. She liked being able to drape fabric and hang it. She also liked being able to go from the 2D to 3D. That caught my attention because that was something that got my interest in fashion design. There's something very fascinating that's creative and yet somewhat mathematical about it. She also mentioned that she is now designing some dresses that are more sculptural and structural; she is using materials that are stiffer and heavier. Those are on a more limited basis. She surprised me because despite her major exposure on Project Runway, she tends to stay to herself. She lives a simple life. She walks to work, walks her dog and makes her meals at home. She said that not all of her fabric was "organic", but all of her material was reclaimed fabric -- fabric that was being thrown away, or not being used. Many times she didn't know where the material was coming from, the history behind it or even what type of material it even was. 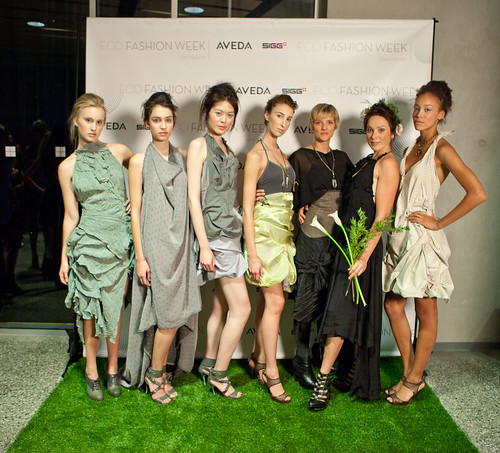 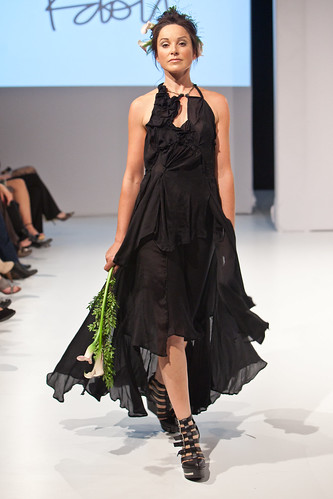 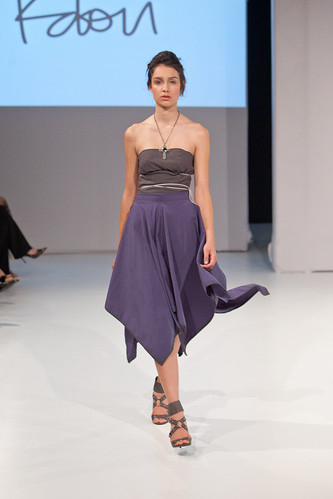 It's clear that in this generation of designers, eco fashion is more about taking small steps. In both your own personal lifestyle and in the choices you are making as a designer. As Myriam Laroche said, you don't have to be 100% eco fashion to do your part -- everybody is doing it in their own way by trying to live a conscious life.

Lara Presber was originally studying architecture in Boston. She decided that she wanted to get into fashion design and apprenticed in Milan. After that she decided to come back to Calgary, where she was born. She felt more comfortable being in Calgary and being around family and friends. She said that there are pros and cons to living in Calgary. It is a small fashion community, so she gets more recognization than if she were living in a bigger city. It's harder for her to get fabrics, but with shipping it's much easier than in the past. She has all of her clothing made locally and believes in supporting the local community, which was a common theme with all of the designers that I interviewed. That in itself has become another aspect of eco fashion, emphasizing that making clothing should have less environmental impact. She said that her clothing at Eco Fashion Week had references to architecture in the style and design. Lara Presber's Spring 2011 collection has an architectural theme with designs based on the new Art Gallery of Alberta in Edmonton.