A fish grows in Vancouver 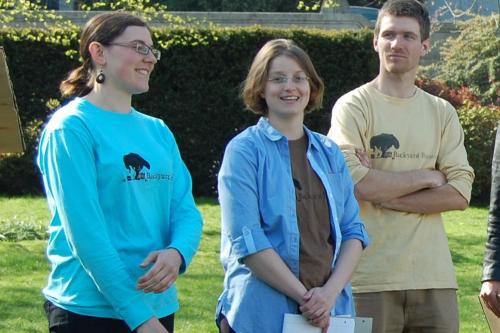 Jodi Peters, Clelie Murray-Chevrier and Duncan Martin in a photograph by Linda Solomon

Near the productive vegetable garden behind City Hall, City Councillor George Chow talked with Jodi Peters, (pictured top left with Clelie Murray-Chevrier and Duncan Martin) an aquaphonics consultant, about growing fish in his backyard pond.  Chow, who lives in Douglas Park,not far from Mayor Gregor Robertson, said he had tried once to farm fish in that pond. It hadn't worked.

Chow, along with Councillors Kerry Jang, Andrea Reimer, Ellen Woodsworth and Heather Deal had into the sunshine that day for the official launch of the Backyard Bounty collective, a collection of four new small businesses based in Vancouver that focus on backyard food systems that you may not yet see in your daily stroll down the lane.

"Four young 'farmpreneurs' with the support of the Environmental Youth Alliance, Farmfolk City Folk and funding from VancityEnviro Visa grant are working to bring backyard food production to a vibrant new level, and I think that today is a good start to that," Trish Kelly, who sits on the city’s Food Policy Council,  said to the small group of city officials, foodies, and urban farmers assembled for the official launch of Backyard Bounty Collective.

Meanwhile, Peters told Chow how to grow carp and  the conversation moved quickly to the possibility of apartment fish farming.  Peters explained to a reporter that growing fish to eat in an apartment was a matter of understanding how to keep the bacteria levels in the tank right and explained that her company would provide the tank, the fish, the plants that would help maintain the right balances in the water, and, perhaps most importantly, they would educate the farmer about how to create a healthy habitat.

Plants are grown in a way (for example a hydroponic system) that enables them to utilize the nutrient-rich water. The plants take up the nutrients, reducing or eliminating the water's toxicity for the aquatic animal.