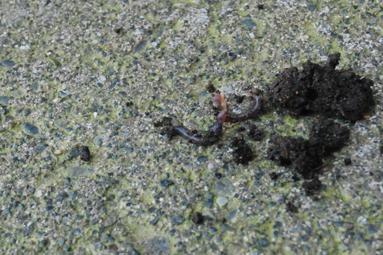 In and around Vancouver, city governments are encouraging residents to do worm composting as part of their garbage reduction programs.

Metro Vancouver’s website recommends that people who are interested in composting, but don't have access to a yard, should use worm composting in offices or apartments to drastically reduce their amount of household garbage.

“Worm composting is generally for people who have apartments and don’t have access to a backyard,” said Sharon Slack, Head Gardner for the City’s demonstration garden. “They [these people] don’t have gardens or backyards for big compost bins.”

Worm bins are significantly smaller than the standard 80 gallon outdoor composts bin,  but are not recommended for everybody.

“We tell people that if they have a house, and have access to a yard, the backyard bin is better because you can put a lot more in it,” Slack said. “They also hopefully have a garden of some kind, so they can put garden waste in there as well.”

Worm composting can take place outside the home, but can also be done inside during the winter.

According to City Farmer, a nonprofit group, worm bins are small, compost containers that can be placed anywhere around the home. If kept properly, the bin will not cause foul odors often associated with compost. The worms need “bedding” in the form of shredded paper, sawdust, crushed leaves or chopped up straw, which creates the area that the worms live in, and will also become a place to bury food.

To compost, worm-keepers must keep the critters out of direct sunlight, and bring the bin inside if temperatures reach below four degrees Celsius. Two pounds of worms, an estimated 2000, are needed to compost one-pound of food waste.

Food items such as vegetable peels, tea bags, coffee grinds and egg shells are the most popular for household composts, and it is recommended to avoid composting dairy and meat products.

City Farmer provides workshops for Vancouverites interested in worm composting. They will also provide the composter, books, bedding, and of course, the worms.

“For 25 dollars, you get everything,” said Slack. “We will teach you everything you need to know about worm composting."

The package provided by City Farmer is worth over a hundred dollars, but is subsidized by the city, as a pound of worms can cost up to $35. Worms provided for composting come to City Farmer from an Abbotsford supplier.

Vancouver, Langley and New Westminster currently support worm composting, and provide worm composters at low-cost to residents. All composters come with mandatory workshops which will explain how to take care of the worms, and compost responsibly.