When hockey and headshots collide 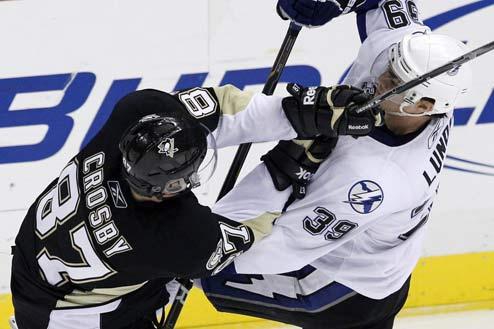 Sidney Crosby battles with Tampa Bay defenseman Mike Lundin on January 5th, four days after he is thought to have suffered a concussion.

Two weeks ago, Sidney Crosby was the greatest player in hockey. With sixty-six points in the bag exactly halfway through the season, he was on pace to blow away the NHL in scoring and reach a mark that hasn’t been surpassed since Mario Lemieux some fifteen years ago.

But last night, he missed his eighth straight game with no timetable for a return—hockey’s brightest, most-marketed star sitting on the sidelines while the NHL moves to inject new life into their hackneyed All-Star weekend.

Then again, concussions in hockey are hardly novel.

Just in the last ten years alone, Vancouver heartbreaker Mike Richter, Flyer captain Keith Primeau, and tough Canuck Gino Odjick had their careers ended by concussion. Bright young players like Mark Moore never had the chance to step onto NHL ice because of their injuries. And, perhaps most notably, first overall pick and league superstar Eric Lindros left the game early because of the toll hockey took on his brain.

But, for some reason, it was only until recently that the league and press took notice of hockey’s arcane rules on contact with the head.
Not so long ago, the play was glorified. Players coasted down the neutral zone with their heads down and were decked by big defencemen, to the delight of the fans. Scott Stevens, the NHL’s most feared player in my parents’ generation, was revered for his game-changing hits, many to the head. And he played this way, never challenged by legality, until his career was ended, ironically, by a concussion.

Sadder yet were the responses from the league office: in 2007, when presented with a list of players who had their careers ended by concussion, hockey operations director Colin Campbell coldly brushed the issue aside.
“Some are legitimate,” he said. “Some you might find aren’t… there’s a small percentage… of players who use it as an excuse, ‘Oh yeah, I’ve got a concussion.’ They can milk it… you know, if you’re trying to get some extra insurance money out of it to get paid an extra year or something.”
We hear so often about the pride of hockey players: the pride that forces them back onto the ice after a brutal injury, the pride that makes them fight to defend teammates, the pride that often puts concussed players into games they should be sitting out.

So why did Colin Campbell so brusquely assault the pride of the league he is supposed to love back in 2007, and why has Colin Campbell failed to publicly recognize his mistake?

The number of concussions in hockey continue to rise: while the league has in the last decade been accustomed to some seventy-five a season, this year and last, there have been thirty-three in the first two months of both the 2010 and 2011 seasons.

That’s why the league so proudly moved last summer to institute rule 48, one that banned “a blind-side hit to an opponent where the head is targeted”, largely as a result of this hit to Bruins star Marc Savard and this one to Florida Panther David Booth. 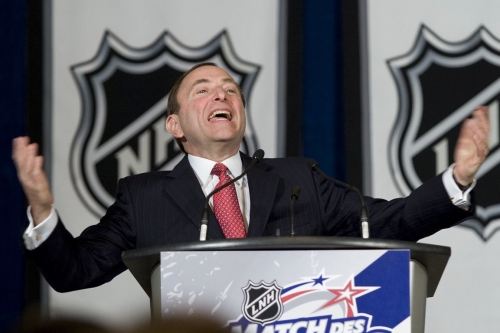 At its introduction last summer, NHL Commissioner Gary Bettman gushed that it could cut head injuries by half.

Though sample sizes are small, this year’s concussion record is exactly that of last year’s.

The NHL of the past has been loath to make a full crackdown on hits to the head, arguing they don’t want to eliminate the physicality that is so dear to its passionate, red-blooded fan base.

But when even the greatest proponent of “rock-em sock-em” hockey, Don Cherry, broadcasts that he sees a problem with head hits in today’s game, it’s time to say, in no uncertain terms, that the hit to the head can, and has, ended a career.

The NFL has already put a full ban on hits to the head. Any foul around the head area in the NBA is whistled as flagrant, and a pitcher throwing high at a batter in the big leagues can expect an ejection, hefty fine, and time on the bench.

The only thing that is clear this season is that the NHL’s sloppily written rule is not good enough to keep the world’s best hockey players safe. What exactly is “blind-side” or “lateral”? How do you know if the hit is “targeted”? What if a player, like in Sidney Crosby’s case, move slightly, right into the shoulder of an opposing player?

As it stands right now, there are too many questions that must be considered when penalizing this dangerous play.

And, as any hockey fan would know, suspensions in the NHL are handed out inconsistently, almost comically. As the old adage goes, a question of supplemental discipline means a spin on the good old Wheel of Justice.

Except in instances of a hit to the head, we’re not just playing with salaries and suspensions.

We’re spinning a wheel with lives on the line.