Vancouver bike share... how will it work? What will it cost? 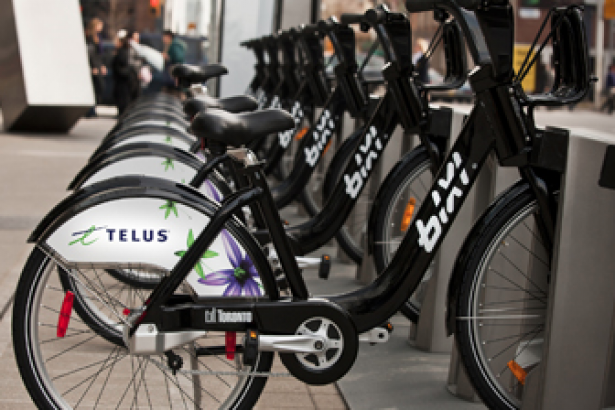 It takes a village to ride a bicycle

Public bike share is coming to Vancouver in 2014. We join hundreds of cities around the world in making quick-trip cycling easily available to the commuting masses.

Bike share originated in Amsterdam in the sixties. Netherlands currently has two nationwide bike share programs: one is called OV-fiets, the other is called rampant theft.

I briefly mentioned Vancouver's upcoming public bike share (PBS) program when discussing Director of Transportation Jerry Dobrovolny's presentation to Board of Change, but now we have more details on Vancouver's PBS plan.

The business side of Vancouver's bike share program will be handled by Alta Bicycle Share, with the hardware implemented by Bixi. This is the same tag team running the PBS programs in New York City, Chicago, Boston, D.C., and Melbourne.

City Hall will be paying out for our PBS program in both cash and opportunity costs. The first year of operation (2014, pushed back from this year) will cost Vancouver roughly $7 million. That seven and six zeroes will buy the bikes, the bike dispensers (that's what they are, right?), and the helmet dispensers, as well as staffing and advertising.

An email from the Mayor's office tells us that City Council will vote on the bike share plan next week.

After the first year, the program is expected to cost half a million dollars per year. Third-party sponsorships will be sought to offset costs further. Alta's New York City PBS is sponsored by a certain megabank and branded as Citi Bike, for example.

Yeah, Alta is based in Portland, but its bikes won't be fixies. We'll eventually be getting 1,500 7-speed bikes, which will live at 125 docking stations. We'll have more shared bikes than Toronto (suck it, Hogtown!), but not as many as Montreal (C'est le snap!).

These docking stations will be clustered downtown, and in Mount Pleasant and Fairview north of 12th Avenue.

Once the program is up and running, its success will mean a drop in parking-meter revenue. Meanwhile, the City will take half of Alta's profits past the break-even point.

It would be great to see the program expand to the North Shore, for day-trippers who'd otherwise be put off by the Seabus-bus combo.

This is how bike sharing works, for those unfamiliar.

If you want an annual membership for Vancouver's bike share program, it will run you $95. Weekly and daily options ($20 and $5 respectively, for adventurous tourists or locals dipping their toes in the bike-commute waters) will also be available.

In addition, riders will have to pay for the time during which they are in the saddle: part of the agreement to move forward with bike sharing is that rides of two hours or more will be cheaper if you rent a bike from one of Vancouver's numerous bike shops.

The docking stations will also be under a sort of restraining order: they can't be within 150 feet of a bike shop. This'll be tough along West Georgia near Stanley Park, huh?

The elephant in the room (and on your head)

We can't talk about bike sharing without mentioning Vancouver's helmet law. Alta plans to help bike sharers avoid fines by providing rental-helmet dispensers alongside its bike racks. The proposed helmet-o-matics will dispense, receive and clean the shared helmets. This is an as-yet-unproven system, and no similar system has been successfully implemented anywhere in the world; so we have no way of knowing how smoothly they'll work, or even if riders will utilize them.

Melbourne has a system of semi-disposable helmets, which are are sold at participating convenience stores, as well as via vending machines at Southern Cross Station and Victoria University. You can return the helmets for a partial refund by leaving them with the bike when you're done.

Alternately, Vancouver could take a page from Tel Aviv's playbook, and exempt adults from the helmet law while they're riding PBS bicycles. I put a call in to City Hall (as could you) to see if we can get a similar exemption.

I also asked Mayor Gregor Robertson's Director of Communications via Twitter if we had any wiggle room.

@jordanyerman it's a provincial law

So we're back to trying to solve the problem with an additional system, rather than by removing the need for that system. Let's bring some optimism, though: hopefully a network of helmet dispensers will work better than a network of participating corner stores.

Or maybe we'll find Vancouver cops willing to... you know... look the other way...

Classier than running for the bus

$95 per year is pretty affordable, especially if you keep your rides to under 30 minutes to avoid add-on charges. If you're late for a meeting or appointment in central Vancouver, think of it as an alternative to running your ass off for the nearest bus stop.

Besides, riding a bicycle is cool.