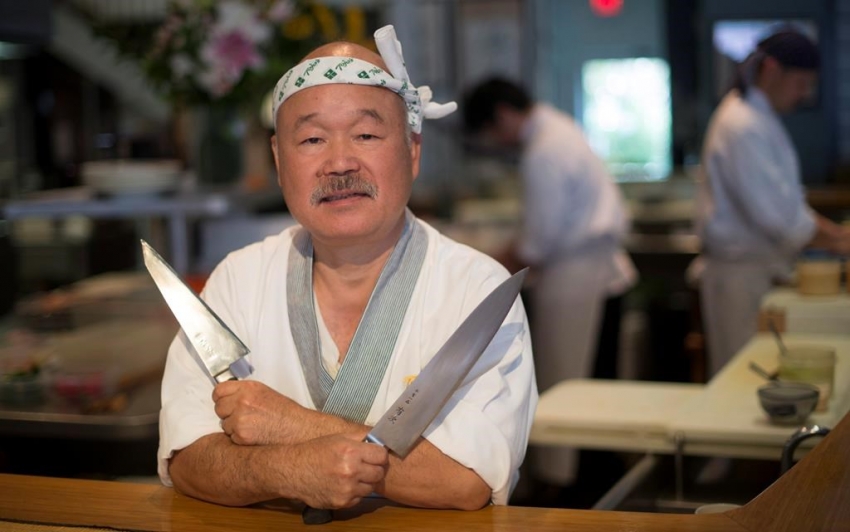 When Hidekazu Tojo began preparing sushi at a modest Japanese restaurant in Vancouver 45 years ago, customers were squeamish about eating raw fish wrapped in seaweed.

So the 21−year−old chef flipped tradition inside−out, hiding the unfamiliar ingredients inside a coat of warm rice. The California roll was born.

Tojo, who is credited with inventing the popular sushi dish, has been named a Goodwill Ambassador for Japanese Cuisine by Japan’s government.

"When I came in 1971, people, they didn’t know about Japanese food. Especially sushi ... to eat raw fish was scary," said Tojo, 66, standing behind the counter of a huge open−air kitchen at his famous restaurant.

In the early days he worked in a neighbourhood mostly made up of "Canadian people," he said, so he challenged himself to cater to their tastes. Slowly he educated his customers, first by serving cooked crab and salmon, and then progressing to raw seafood rolled up in disguise.

Tojo said it was hard to get people to eat sushi.

"But hippie people, open−minded, artist people, (they said) ’Tojo, this is good idea. Great idea.’ They started to eat, then spread it all over."

The chef, whose name is synonymous with top−tier sushi in Canada, was scheduled to be honoured Thursday at a ceremony hosted by Japan’s Ministry of Agriculture, Forestry and Fisheries. The Japanese consulate says he will be one of only 13 Goodwill Ambassadors abroad.

Donning his trademark hachimaki, or headband, Tojo nimbly sliced fish and pieced together a California roll in about 45 seconds during a recent visit to his restaurant. When he invented the roll in 1974, almost everyone in his 32−seat restaurant was ordering the combination of West Coast dungeness crab, avocado, spinach and egg. He still calls it the Tojo roll.

Boosted by its success, he went on to break tradition again and again.

Tojo said he was the first to sear tuna for the dish called tuna tataki, because he couldn’t obtain the Spanish mackerel used in Japan. He said he created spicy tuna and the great Canadian roll, which combines Pacific salmon and Atlantic lobster. He was the first to use smoked salmon in sushi, he said.

The West Coast’s willingness to sample exotic food, and its unique local ingredients, shaped Tojo’s approach in his kitchen, he said.

His cuisine has influenced the modern incarnation of sushi now popular around the world, said Tojo, adding he’s been head−hunted by restaurateurs in Tokyo, Los Angeles and New York City but has never considered leaving Vancouver.

"We have beautiful salmon, albacore tuna, halibut, sable fish, spot prawns, geoduck, scallop, oyster. Especially if compared to other cities in Canada, we are very lucky."

Asked how he feels about not getting much credit for his signature creations, he laughs, then retrieves piles of magazines extolling his recipes without acknowledgment.

Tojo has lived in Vancouver longer than his home country. He apprenticed for 16 hours a day at a high−end restaurant in Osaka before moving when a co−worker’s husband who was Canadian hired him to be a chef in Vancouver.

Just last week, he dusted a sushi roll with edible gold flakes for executives of a B.C. mining firm.