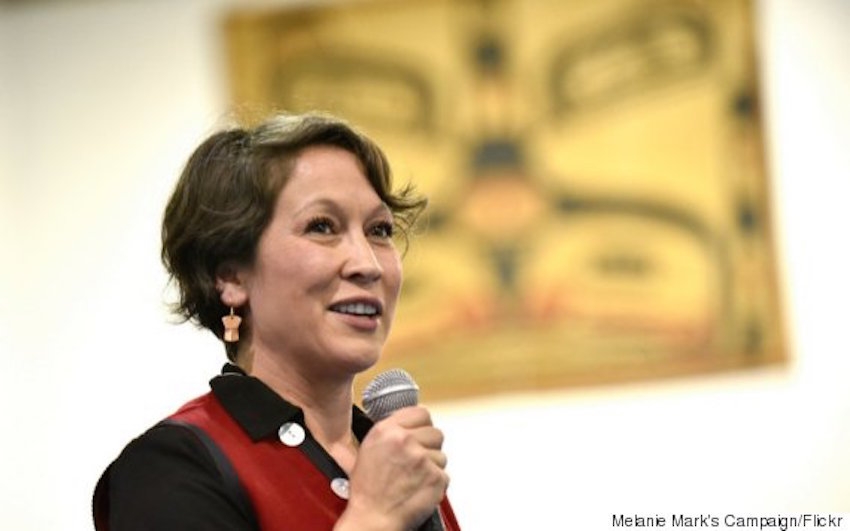 Melanie Mark made history Tuesday by becoming the first First Nations woman elected to the B.C. Legislature. Mark, the NDP candidate in the Vancouver-Mount Pleasant byelection, handily defeated Liberal candidate Gavin Dew and Green candidate Pete Fry by winning over 60 per cent of the vote.

Mark who is Nisga’a, Gitxsan, Cree and Ojibway was born and raised in the East Vancouver neighbourhood she'll now represent as an MLA.

Her family lived in social housing and moved over 30 times throughout her childhood. In later years, Mark studied at SFU and went on to work in the Office of the Representative for Children and Youth, eventually being promoted to associate deputy representative to Mary Ellen Turpel-Lafond.

Tuesday's byelection also held success for another New Democrat, Jodie Wickens in Coquitlam-Burke Mountain. Wickens also won her riding with more than 46 per cent of the vote, pulling ahead of Liberal Joan Isaacs by 626 votes by the end of the night.

Mark said she dug deep and reflected on her days as a rugby player to come up with the win.

Wickens said she knew the race would be close because her riding is a traditional Liberal stronghold and she didn’t take anything for granted.

However, she said she heard some consistent messages when she visited local voters.

Isaacs said in a statement that she plans to seek the Liberal nomination for the 2017 provincial election.

“I am proud of the accomplishments that a strong provincial economy and B.C. Liberal government has brought to Coquitlam-Burke Mountain,” she said.

Premier Christy Clark called the byelections last month to fill legislative seats left vacant by Jenny Kwan and Doug Horne who both decided to run in the federal election.

Kwan won for the New Democrats, while Horne lost for the Conservatives in the October vote.

The next provincial election is scheduled for May 9, 2017.

Prior to Tuesday’s vote the Liberals held 48 seats in the legislature, compared to 33 for the New Democrats and two independents.

The B.C. Liberal Party has noted that since 1963 governing parties have only won four of 32 byelections.

With files from The Canadian Press.