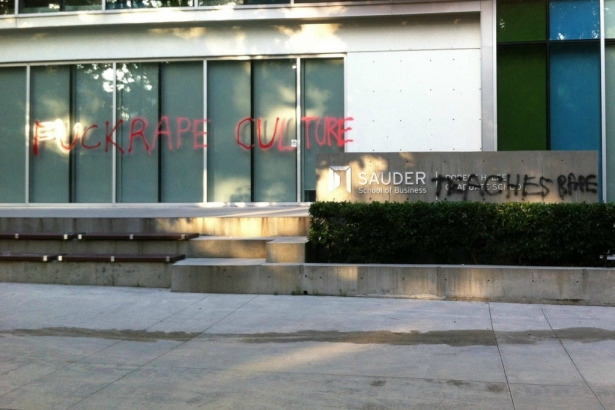 Anti-rape graffiti was scrawled across the UBC Sauder School of business and the plaza outside the Walter C. Koerner library after students allegedly participated in a variation of a cheer condoning underage rape.

The chant, which was led by FROSH leaders and first-year commerce students at a Sauder School orientation, featured the following lyrics, according to a student who was at the event:

Critics were reportedly angered not only by the chant, but by the apology issued by the Commerce Undergraduate Society.

“While we do our best to provide a safe and controlled environment during formal Sauder FROSH sessions, there is admittedly little we can do to completely control what some leaders may expose their students to,” the CUS statement said.

CUS co-chair Jacqueline Chen also told the The Ubyssey, the university newspaper, that student leaders have known about the chant for years, and previously advised students to remove reports of it from social media so that it remains private.

One first-year student who participated in the chant said it was meant to be "just for fun" and didn't find it offensive.

The incident sparked national outrage in Canada, particularly after the chant first came under fire at Saint Mary's University in Halifax.

"As a survivor of sexual assaults, including one that occurred on the UBC campus, I am tired of this," she wrote.

"It is up to UBC, as a institution, to draw a line in the sand about what kind of behaviour will and will not be tolerated on campus."

Canada "world's best country for women" unless you're a rape victim