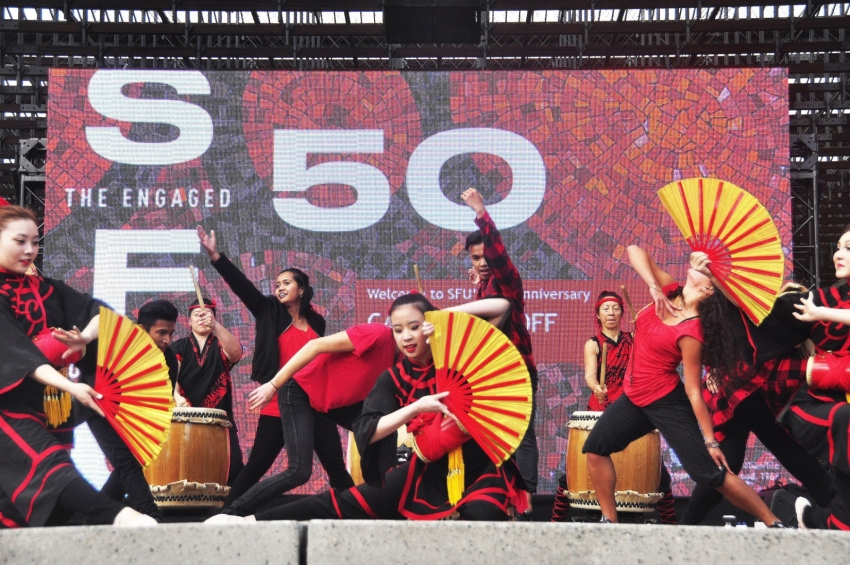 On September 9, 1965 Simon Fraser University opened up on Burnaby Mountain with 2,685 students enrolled. Just 50 years later, the university’s enrollment has skyrocketed, growing to over 30,000 undergraduate and graduate students registered for courses for this fall semester at three campuses in Surrey, Burnaby and Vancouver.

The significant growth of students has been accompanied by an evolution of the school’s vision. Andrew Petter, the university’s president, says that change has been driven by a commitment of the university’s past leaders to set their own course and to adopt new approaches.

“In five short decades, we have grown from our radical roots to become Canada’s ‘Engaged University’,” says Petter.

A large part of the university’s engagement story can be traced to its multi-campus evolution.

In downtown Vancouver, the university opened in 1989 with the rebuilt and revitalized 1927 Spencer building at 515 West Hastings Street. Today the university boasts a range of heritage and culturally influential buildings scattered across the downtown core. In Surrey, SFU remains a critical community partner in Central City since it was established in 2002.

The growth of both campuses along with the development of academic facilities on Burnaby Mountain has put the university in an enviable position when it comes to community engagement.

In Surrey, SFU's 14-year-old campus has been an integral partner in the development of the city's downtown core. In addition to supporting the area’s economic growth in the region, it is also playing a critical role in meeting the growing needs for post-secondary education south of the Fraser.

More recently SFU has become a major player in Innovation Boulevard, an initiative of the City of Surrey, Fraser Health and other partners, to grow health technologies and business in the region. Innovation is also being driven through programming, including a new focus on social entrepreneurship and vehicles such as Venture Connection, a mentoring program for students.

In Vancouver, SFU has launched three significant initiatives to enhance the university’s reputation as an engagement and innovation engine. On the cultural side of things, SFU Woodward’s has become an artistic focal point on Hastings Street as it attracts high level performances (from the Tribeca film festival hit “Circa 1948”  to Robert LePage’s 887) while still supporting its community in the Downtown Eastside via a range of innovative partnerships.

In business, SFU is leading the way with RADIUS (radical ideas, useful to society), a social enterprise incubator as well as through its signature engagement vehicle Public Square. Through its unique model, Public Square has managed, for the past five years, to ignite a wide-range of nationally important conversations ranging from the dangers of income inequality to the role (and possibility) of innovation as savior to global challenges such as climate change.

All this has the university’s president ready to celebrate.

“As we move forward with purpose, SFU’s 50th milestone challenges us to look forward with an even stronger commitment and focus on interdisciplinary education, cutting-edge research and far-reaching community engagement,” says Petter.

Learn more about the wide range of events taking place at all three campuses by clicking here.