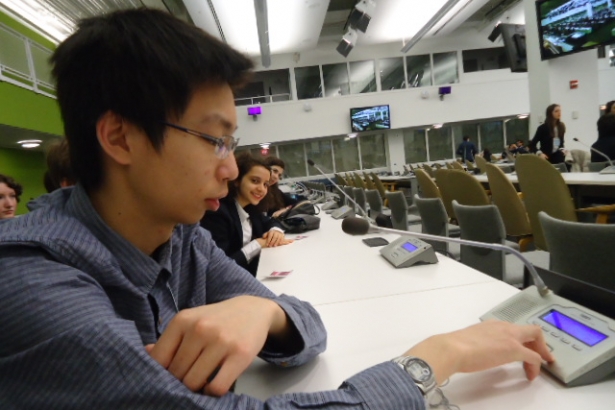 This March, Magee students dabbled in world affairs as they charted the course of Papa New Guinea in New York.

The 18 secondary students from Magee joined over 3300 delegates from all over the world to participate in the Model UN, a innovative program aimed role-playing global affairs and exposing students to world issues and global politics and governance.

“I find that being globally aware is crucial. And model UN gets you to understand perspectives you wouldn't ghet to know. It also has lots to do with teamwork,” said Model UN student Adi Pick.

During the four days of activities, Magee students advocated for increased funding to support their sexual reproduction policy priorities to combat the AIDS epidemic raging in their country. Meanwhile, the students made new friends from countries as diverse as Italy and Venezuela.

Prior to the event, Magee students got a chance to tour New York, taking the subway, strolling Midtown, wolfing down $1 pizza slices, touring Brooklyn’s flea market and catching a harbor light cruise.

Pick says her friends even got to stand outside a downtown studio at 5 AM to catch Jimmy Fallon's show – a definite highlight for the young Vancouverite.

Magee teacher Holly Chalmers and Kelly Hawbolt say the students deserved this trip due to their hard work and performances at the Vancouver Model UN and Canadian High School Model UN.

“Magee had been doing model UN for 4 years. It is all student driven,” says Chalmers, who was approached to be a staff sponsor early on. “Model UN attracts a certain type of student who has strong language skills. What is interesting is that their language skills are reinforced and they meet like- minded kids. It creates a community where it is ok to debate these issues and talk about these things.”

Chalmers and Hawbolt say that the students who they took to New York worked hard to get there raising money through samosa sales, bake sales, car washes and by selling textbook covers. They even organized a survey promotion shuttling hundreds of their peers into the school computer lab to vote and winning over $1,000.