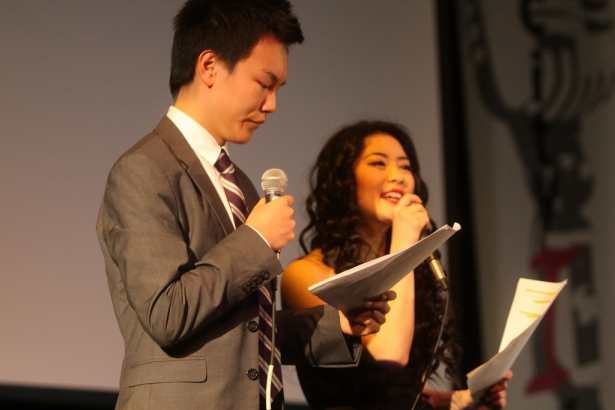 The citizens of Vancouver have spoken, and on the night of April 18, 2013 in the Vancouver Technical Secondary auditorium, they crowned their new VanCity Idol.

Eight singing contestants from secondary schools from across the city went head to head in an attempt to win the talent competition, but only one walked away as the 2013 VanCity Idol.

Amanda Sum, a Grade 10 student at Magee Secondary School performed an acoustic version of ‘Straight Up’ by Paula Abdul and beat out the seven other vocalists to claim the top spot.

VanCity Idol is an annual charity event planned and executed almost entirely by the Vancouver District Student Council, a committee that represents all secondary schools and alternative programs during VSB decision-making processes.

“The proceeds from ticket sales are going to the local Kids for Climate Action,” said Patsy Peters, education coordinator for the VSB and event co-organizer.  “They are a youth charity founded and based in Vancouver that is devoted to raising awareness about climate change.”

This particular competition is similar to other television singing competitions in the sense that the audience plays a vital role in choosing a winner, and the contestants are also critiqued after their performances by judges.

“We have eight idols here tonight,” said Sally Lin, VDSC social events coordinator.  “The judges pick the top five, and from there, the audience votes for their favourite singer and decide the top three winners.”

Going into the final night of performances, Sum was a bit anxious.

“I perform a lot with my choir, but I don’t have a lot of experience performing by myself,” she said.  “So I’m a bit nervous tonight.”

And the nerves seemed to be felt by all of the contestants before their curtain call.

“I have been performing for quite a while,” said Gabby Symons.  “But I’m definitely still nervous and excited too.”

Many of the contestants said that the support from their friends and family makes performing on stage less intimidating.

“Well I’m Italian, so I have a lot of family and they will all be in the audience,” said Daniella Bozzetto.  “They have a lot of confidence in me, so that helps me a lot.”

Prizes for the winner include studio recording time, and the top three singers receive scholarships as well.