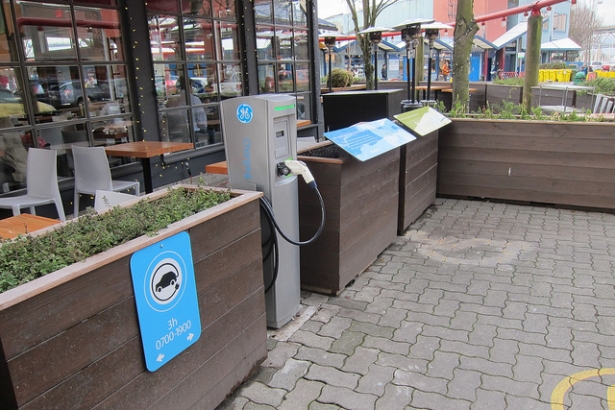 Electric car enthusiasts will see up to 150 new charging station throughout Metro Vancouver area such as this one on Granville Island by next spring. Photo credit: Stephen Rees.

"The City is partnering with Metro to ensure that the ‘on the go’ public locations are part of the planned regional network," a city spokesperson wrote in an email to The Vancouver Observer.

The City will provide some of the host sites as part of their own pilot project announced in February, which proposes at least 67 charging stations by the end of 2013.

The City's charging stations are funded through Charge and Go Vancouver, a field trial co-funded by the City, the Federation of Canadian Municipalities, the province, and BC Hydro. Metro Vancouver's charging stations project will be funded in part through the Provincial Community Charging Infrastructure Fund.

Host sites to commit to charging stations by November 30

Metro Vancouver will identify, evaluate and get commitment from host sites by November 30, and hosts must install the stations by March 2013 to qualify for cost-sharing with the province, according to Metro Vancouver communications officer Greg Valou.

Metro Vancouver received a $75,000 grant from the province. Seventy five to 150 host sites are planned for electric vehicle chargers in partnership with 14 member municipalities, which includes Vancouver, Burnaby and Richmond.

Host sites will include malls, theatres and tourism destinations, said Metro Vancouver Chair Greg Moore. It will be up to the host sites to decide whether or not they will charge for e-fueling. The search for potential host sites has yet to begin.

BC Hydro will provide the power at the stations, which will supply 220 volts at 40 to 60 amps.

Charging units will cost between $1,000 and $4,000 to build, depending on how many terminals hosts wish to have, the technology they use, and what level of construction and infrastructure is needed. So far no companies have come forward to bid on contracts to build the charging stations.

Costs will be split through the grant program. BC will pay up to 75 per cent of a charging station capped at $4,000 per installation, Valou added. The province's Community Charging Infastructure Fund, which is providing the grant, amounts to $2.7 million, and aims to support a province-wide network of up to 570 electric car charging stations.

There are 100 e-vehicles in the province, according to Valou's estimate. Whether or not this will increase depends on the cost of fuel, electricity costs, availability of infrastructure, social norms, popularity of hybrid cars, among other factors, he said.

See more
After a stroke, rebirth as a comic artist
Hottest events in Vancouver this week

Promises Made for BC To Pioneer New Electric Car

In Praise of the Electric Bike